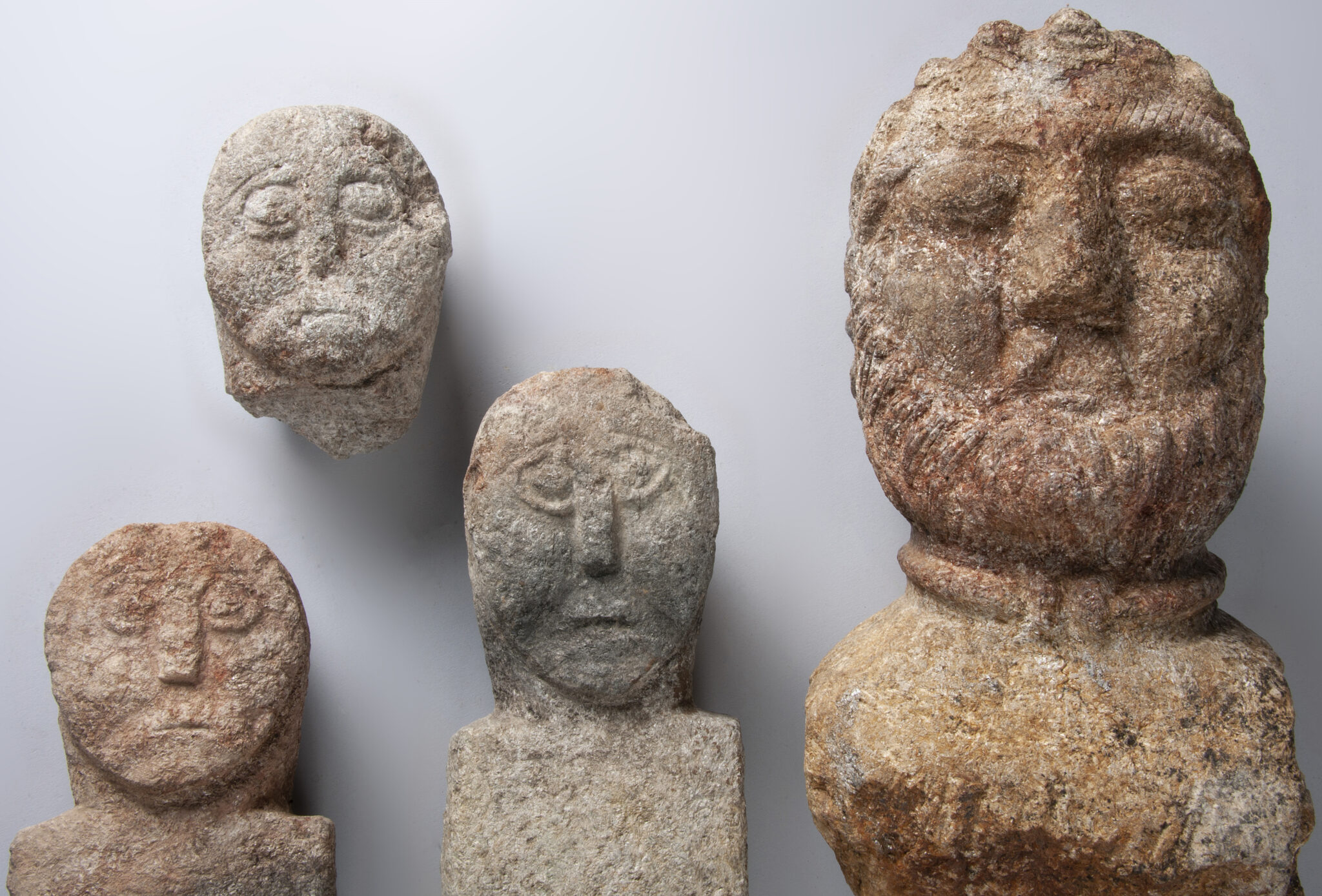 Four Iron Age busts and an beautifully preserved wooden banquet bucket have been presented to the public for the first time in an exhibition at the Musée de Bretagne – Les Champs Libre in Rennes, Brittany. The bucket is unique in Brittany, and unique for having been found in a well instead of a tomb.

in Trémuson that proved to be a large country estate of the Gallic elite occupied and altered between the 3rd and 1st century B.C. In the middle of the 1st century B.C., some sort of upheaval caused the residents to deposit objects as offerings at the bottom of the well.

The first sculpture was found near the well, face down in a pit dug to the busts’ dimensions. It is the bust of a man wearing a torc around his neck, marking him as an aristocrat. The figure is finely modeled, with neatly

combed hair and a well-shaped beard. It dates to the middle of the 1st century B.C. The three other statuettes, torcless and more roughly modeled, were found at the bottom of the ancient well. The four busts all bear traces of fire and deliberate damage. It’s possible this was once a set with religious purpose that was desecrated and burned.

The abandoned well’s waterlogged soil had preserved objects, including a

great deal of wood, thrown into it during the troubled mid-1st century B.C. As archaeologists dug down, they encountered charred wooden planks and other architectural elements including poles, beams and posts. The planks may have been part of the cover of the well in its heyday. It total, the team recovered 460 pieces of waterlogged wood, most of them fragmentary and partially carbonized by fire.

At the bottom of the well were the three busts, a beautifully tuned fragment of wood furniture, an ash mallet, a cylindrical oak bucket, several staves and the exceptional tripod banquet bucket. Crafted of yew wood encircled with two bronze straps and decorated with bronze openwork plates, the tripod bucket dates to the second half of the 2nd century B.C.  They were used at banquets to serve wine. The bucket is almost complete, missing only a few small pieces of the openwork and metal accents.

The woods are so well-preserved they are remarkable representatives of Gallic woodcrafts. The oak bucket has a drain hole in the bottom that still has its maple cap in place. The ash mallet was fragmented in the way it was because a fracture in the mortise. It also has perforations from the joinery and visible marks from a planer blade on the underside of the head. The yew bucket has the small dowels used to reinforce the staves at their connection points still safely in place.

The fragile wood pieces were soaked with PEG which removes the water in the cells and replaces it with a waxy substance that keeps the wood from warping and shrinking as it dries. The process took two years. Conserved and stable, the yew bucket went on display with the four sculptures on March 18th and will remain on display until December 4th.