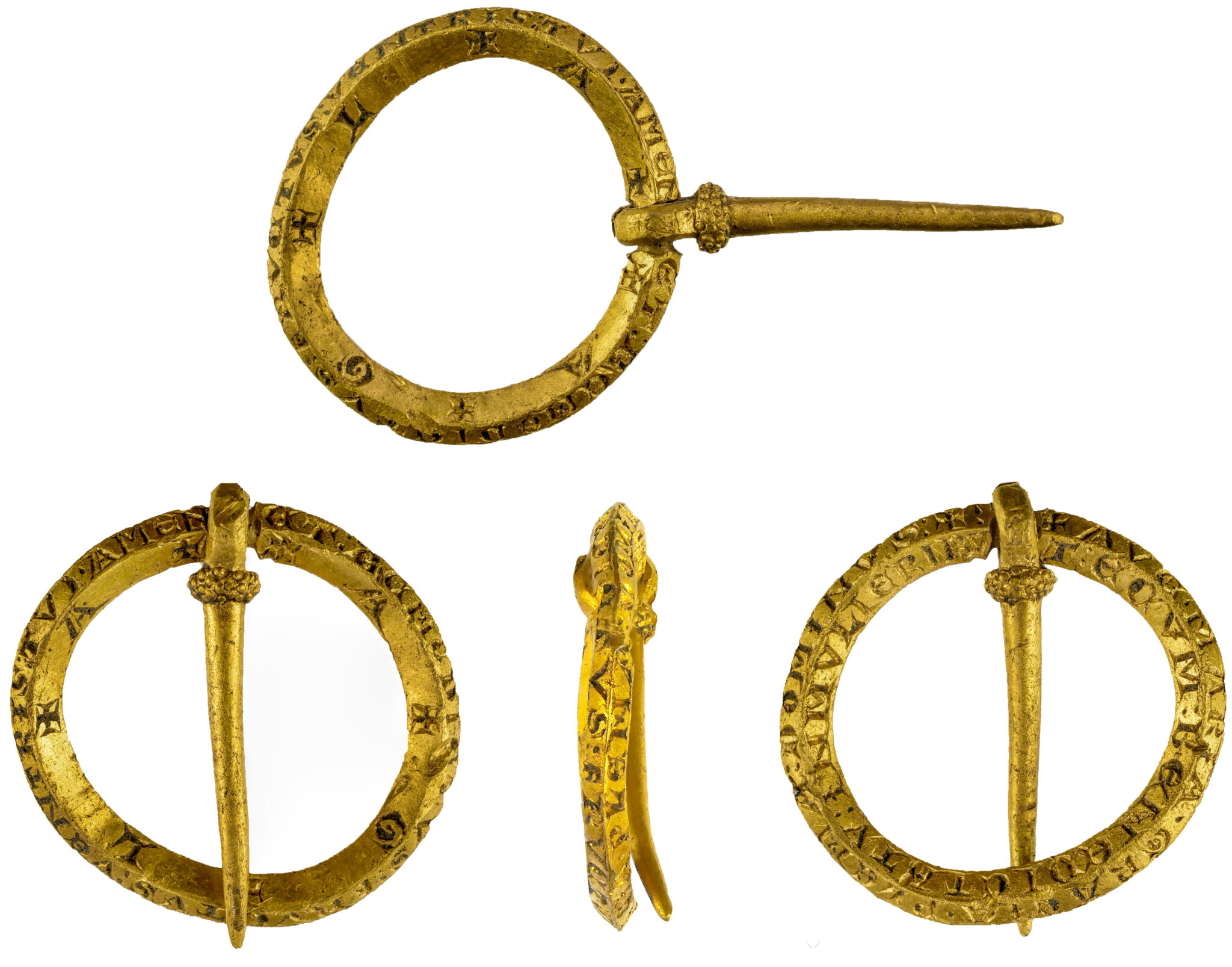 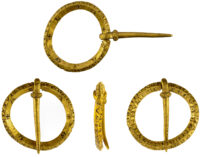 A Medieval gold annular brooch with prayerful inscriptions has been discovered the parish of Manningford in Wiltshire. It dates to between 1150 and 1350 A.D. and is inscribed with a Latin prayer and initials of a Hebrew phrase believed to have amuletic properties. While this type and age of inscribed brooch has been found before, this one is unique on the archaeological record because the inscription is complete, has no errors (common in an age when artisans were not literate), is engraved on four sides and includes both the prayer and the amuletic initials.

The brooch is composed of a circular frame with a pin attached by a loop. The front and back of the frame is bevelled, giving the ring four surfaces, all of which are inscribed in Lombardic style letters. The inscription on three of the surfaces is the Hail Mary which all together read: + AVE. MARIA. GRACIA. PLENA: DOMINVS: + T: ECVM: BENEDICTATV: INMULIERIBV ET: BENEDI(CT)VS: FRVCTVS: VENTRIS: TVI. AMEN. (Meaning “HAIL MARY FULL OF GRACE THE LORD/ IS WITH THEE/ BLESSED ART THOU AMONGST WOMEN/ AND BLESSED IS THE FRUIT OF THY WOMB. AMEN.”) The S at the end of “MULIERIBV” is missing, not an error, but a deliberate choice because the pin attachment was in the way.

The fourth surface, the reverse inner angle, reads: + A + G + L + A +, the initials of the Hebrew phrase “Atha Gebir Leilam Adonai. (Meaning “Thou art mighty forever, O Lord.”) The AGLA initials were used in the Middle Ages as words of power to protect against illness, particularly fever, and nefarious supernatural forces. 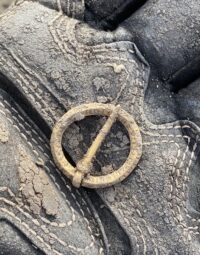 The brooch was discovered by metal detectorist William Nordhoff in March of last year in a freshly plowed field in Pewsey Vale. At first he thought the circular object, dullened by encrusted soil, was a base metal piece, but when he picked it up, he saw that it was gold and that it was covered with writing. He reported the brooch to the Portable Antiquities Scheme finds liaison.

It was declared treasure last month at a coroner’s inquest (a foregone conclusion given that it’s more than 300 years old and made of more than 10% precious metal). The next step is valuation, after which a local museum, in this case likely the Salisbury and South Wiltshire Museum, will have the opportunity to acquire the brooch for the assessed market value.