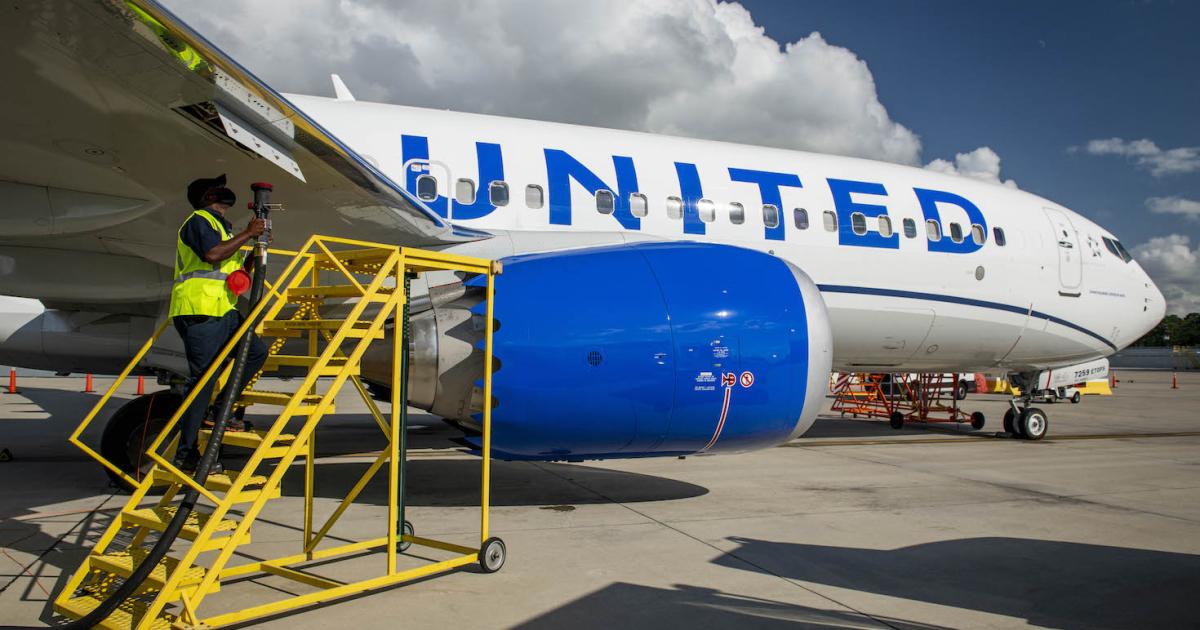 United Airlines’ push to encourage the use of sustainable aviation fuel gained altitude this week with the addition of 13 new companies to its nascent Eco-Skies Alliance program, including software powerhouses Meta, Microsoft and Salesforce, shipping giant Maersk and financial services firms American Family Insurance, Visa and Zurich North America. That brings the number of participants to more than 30.

Through the initiative, corporations can fund purchases of sustainable aviation fuel (SAF) throughout the United flight network. Since the program was launched in April those buyers have collectively contributed to the purchase of more than 7 million gallons of SAF by paying a premium for services. That’s less than 1 percent of about 4 billion gallons of fuel that United burns annually, but it’s more than double what the airline projected that corporate buyers would procure when the effort was initially announced. (The SAF purchased so far in 2021 translates into about 460 million passenger miles.)

When I spoke with United CEO Scott Kirby about the airline’s decarbonization strategy, he said the importance of purchasing commitments in the adoption of SAF cannot be underestimated as a catalyst for research, development and commercialization. “This is not just about buying a gallon of fuel,” he told me. “We are investing the proceeds into this industry.”

United’s SAF purchasing commitments dwarf those of its rivals, although Kirby said he hopes he can’t make the same claim one year from now. The airline’s biggest deal, by far, is one disclosed in September under which it will buy 1.5 billion gallons of SAF over the next 20 years from Chicago-based company Alder Fuels. United previously contracted for an option to buy 900 gallons of biofuel from another provider, Fulcrum BioEnergy.

If there’s one thing about which Kirby is adamant, it’s that the industry needs to support this transition together. To build awareness, United welcomed more than 100 partner executives, business leaders, government officials and journalists aboard its latest SAF demonstration flight, a jaunt from Chicago to Washington, D.C.

What’s notable about this flight was that it used 500 gallons of 100 percent SAF in one engine, and the same amount of conventional jet fuel in the other engine — the aircraft was a Boeing 737 Max 8. The focus of this test was to ensure that there are no operational differences for SAF, a “drop-in” alternative that can be used in existing planes.

The test was conducted in collaboration with Boeing, jet engine maker CFM International, additive company Virent (a subsidiary of Marathon) and World Energy, a commercial SAF maker that has been a United SAF supplier since 2013. Kirby told me that United is speaking with “double-digits” of other potential partners to build up its supply network regionally, so that fuel doesn’t have to be transported far distances to airports.

Kirby is realistic that this will be a long journey, and he’s adamant that the entire industry needs to get on board to speed up the transition. The Mission Possible Partnership for aviation, of which United is a founding member along with Delta Air Lines, Virgin Atlantic and KLM, estimates it will take an annual investment of $300 billion to get to net zero for the industry by 2050. That financing needs the encouragement of government incentives, such as the blender tax credit that’s part of the Build Back Better legislation currently before the Senate, Kirby said. “The problems are solvable, but they’re not simple,” he said.

As part of its overarching goal to achieve zero emissions logistics by 2050, Deutsche Post DHL has committed to increasing the percentage of SAF it uses in its operations to a blend of at least 30 percent by 2030. That was one motivation for DHL Global Forwarding to join United’s program earlier this year, according to Kathrin Brost, global head of the GoGreen program for DHL Global Forwarding.

Under GoGreen Plus, DHL Global Forwarding’s customers can choose to reduce the transportation-related emissions through a sustainable fuel switch. The accounting is handled by DHL, and the results are verified by a third party.

While Brost declined to say how much SAF DHL Global Forwarding is buying through United’s program, she said customer inquiries are doubling on a monthly basis and she expects significant increases in consumption during 2022.

One key is to provide a more straightforward way for the various participants to account for reductions against their carbon footprint. DHL is piloting a “book and claim” approach for attributing the reductions associated with a customer’s use of SAF. This method decouples the benefits of reductions from the physical use of sustainable fuels, enabling the customer that pays for them to claim them against their carbon footprint. That means that a DHL customer in Asia, for example, that doesn’t have direct access to transportation methods using SAF can benefit from flights originating elsewhere.

Brost hopes this will simplify the use of SAF. United is also running tests of this approach with Microsoft, Air BP and the Roundtable on Sustainable Aviation Biomaterials. And Brost would like to see a standardized methodology emerge. One group working toward that end is Clean Skies for Tomorrow, a World Economic Forum initiative.

“It’s not enough to have all these pilots. Having standards to account for the CO2 reductions in a meaningful way is success-critical,” she said.

Brost also said buyers’ associations, such as the First Movers Coalition (of which Deutsche Post DHL is a member) will be critical for pushing SAF toward the mainstream. “We need to team up, we need to bundle the demand, we need to channel the funds and scale up the solutions,” she said.