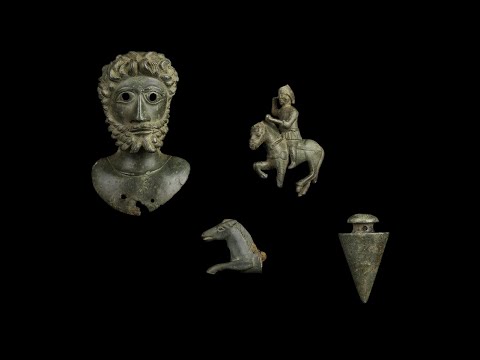 The Yorkshire Museum is hosting a series of online expert lectures and curatorial talks dedicated to the Ryedale Hoard, the unique group of ritual bronzes used in ceremonies of the imperial cult in the late 2nd century that the museum was able to acquire last year. The hoard went on display to the public for the first time when the museum reopened in April. The lecture series runs in conjunction with The Ryedale Hoard: A Roman Mystery. There will be one online talk a month until the exhibition ends in March 2023.

Each episode in the series is first livestreamed on the museum’s YouTube channel and Facebook page. The lectures are following by a Q&A period where viewers can ask questions in the comments. The recorded lecture is then posted on YouTube.

There have been two so far. The first video is hosted by Professor Michael Lewis, head of the Portable Antiquities Scheme at the British Museum, and delves into how Treasure is defined in terms of the 1996 Treasure Act. This is relevant to the Ryedale Hoard because it failed to qualify as official Treasure despite its undisputed antiquity and unprecedented archaeological importance and was only saved for the public patrimony thanks to Richard Beleson, a generous supporter of the Yorkshire Museum. Lewis lays out the processes of the PAS and explains how archaeological treasures can fall through the cracks, using examples some bloggers you know might have obsessed over once or twice.

The first talk doesn’t really get into the particulars of the Ryedale Hoard, however. That’s what the second one does. It is hosted by the Yorkshire Museum’s curator of archaeology Lucy Creighton. She covers the discovery of the objects by two metal detectorists, how they realized they had found something really special, then goes into detail about the objects themselves, holding them up to the camera to point out features that are not necessarily conveyed in still photographs. She points out a peg embedded in the hoof of the horse and rider figure that would have originally been slotted into a base with a flat surface, for example, and shows a piece of bronze found inside the head of the Marcus Aurelius bust that was once the back of the head.

The next online lecture looks excellent as well. Metals, Making and Magic: The Smith in Roman Britain will be delivered by Dr. Owen Humphreys on July 21st. Sign up here to receive notices of future lectures. I did last month, forgot all about it, and remembered only after I received the museum’s reminder email linking to the discussion.