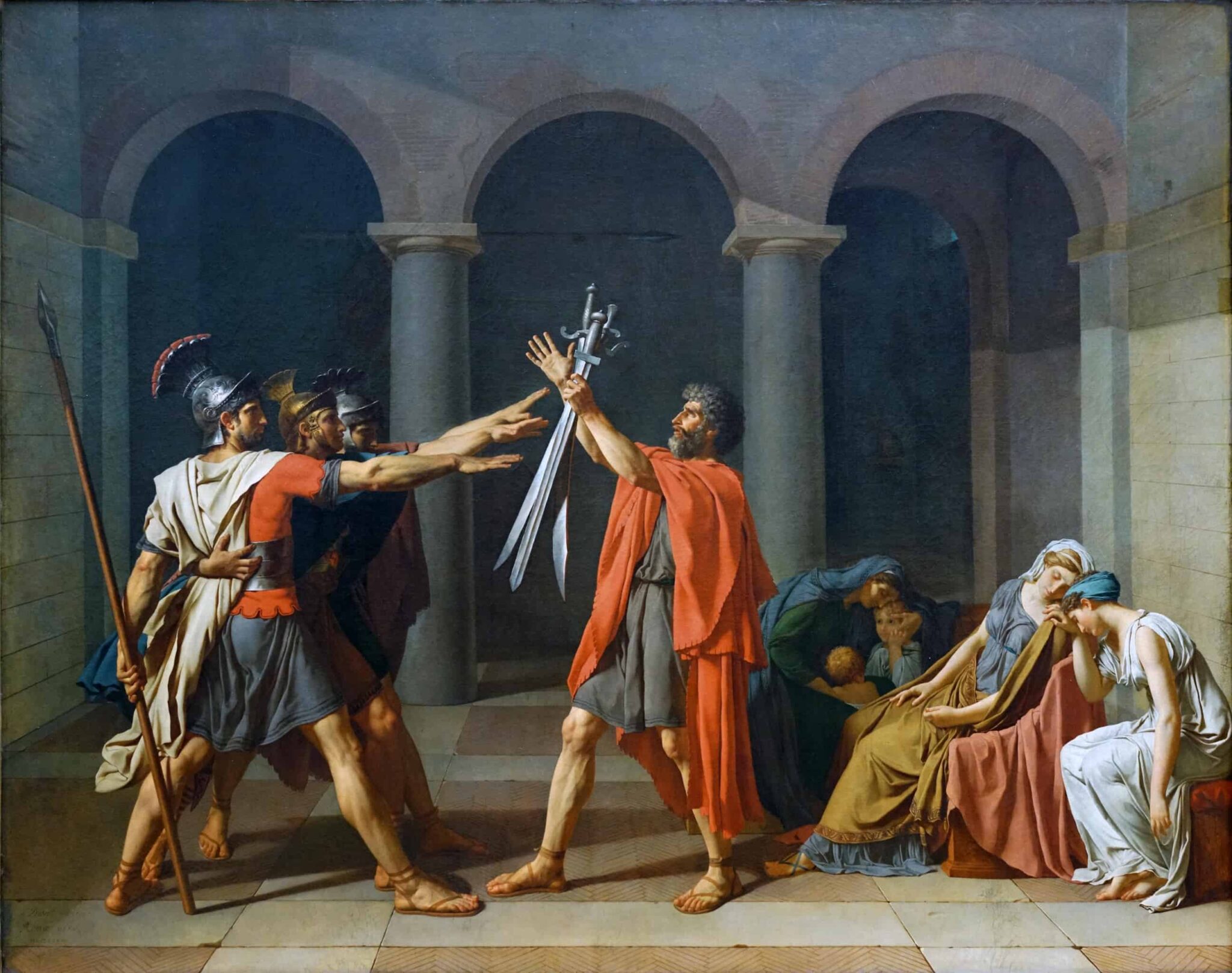 The Tennis Court Oath was one of the pivotal moments of the French Revolution. The day was June 20, 1789. The deputies of newly-formed National Assembly, a little too heavy on the Third Estate, too light on the Clergy and Nobility and way too keen to make France a constitutional monarchy for King Louis XVI’s taste, arrived at the meeting place of the Estates General only to find the doors barred and the premises occupied by troops. So they regrouped a few streets over inside the Royal Tennis Court Louis XIV had built a hundred years earlier to play the “jeu de paume,” a precursor to tennis, on the recommendation of his physician.

Deputy Jean Joseph Mounier proposed that in response to this insult to their rights, the nation’s representatives take a solemn oath in defense of the public good and national interest. The proposal was received with thunderous applause and the Assembly quickly drew up a decree:

The National Assembly, considering that it has been called to establish the constitution of the realm, to bring about the regeneration of public order, and to maintain the true principles of monarchy; nothing may prevent it from continuing its deliberations in any place it is forced to establish itself; and, finally, the National Assembly exists wherever its members are gathered.

Decrees that all members of this assembly immediately take a solemn oath never to separate, and to reassemble wherever circumstances require, until the constitution of the realm is established and fixed upon solid foundations; and that said oath having been sworn, all members and each one individually confirm this unwavering resolution with his signature.

The deputies then each “signed” by swearing:

We swear never to separate ourselves from the National Assembly, and to reassemble wherever circumstances require, until the constitution of the realm is drawn up and fixed upon solid foundations.

This was the first direct confrontation between the revolutionaries and the king. They were still on board with a monarchy, but only as bound by the will of the people. By this oath they declared to Louis XVI that the National Assembly was in service of the public and national good, not the king. 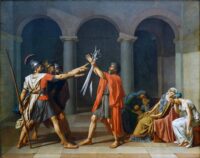 A year after the momentous event, oath-taker Edmond Dubois-Crancé asked his friend painter Jacques-Louis David to commemorate the anniversary with a monumental painting that would put the Tennis Court Oath on the same plane as David’s famed historical works like 1784’s The Oath of the Horatii. David exhibited a preparatory pen-and-ink drawing of his planned painting in 1791, hoping to sell engravings of the drawing via national subscription to raise the 72,000 pounds he needed to complete a painting 33 feet long.

Unfortunately for David, the France of 1791 was very different from that of 1789. Constitutional monarchists were very much not in favor anymore and many of the 1789 heroes were either fired, disgraced or, well, dead, by 1791. The subscription model failed because the public had no interest in celebrating the event. David never finishing the painting and kept it in his workshop until his death in 1825. The unfinished work was cut up into three pieces by his heirs. The largest portion was sold to the state and is now on display in the Chimay attic at Versailles.

The Tennis Court itself became property of the state in 1793 and was closed to the public in 1798. It was used for random purposes — storage, workshop, painter’s studio — for a while and listed as a national historic monument in 1848. Come the Second Empire, the Royal Tennis Court was neglected, its associations no longer appreciated by the powers that be.

The idea of celebrating the Tennis Court Oath came back into favor a century later under the French Third Republic which embraced its revolutionary antecedents. In 1880, July 14th, Bastille Day, was declared the French National Celebration, and the government began to plan for a museum of the Revolution. In 1882, the old Royal Tennis Court, abandoned for decades by that point, was chosen as the spot for the new museum.

It was refurbished by the architect of the Palace of Versailles, Edmond Guillaume. The French government also commissioned a new artist, Luc-Olivier Merson, to make a painting of the Oath based on David’s drawing and unfinished canvas. Ninety-four years to the day after the deputies of the National Assembling took the Tennis Court Oath, the new Museum of the Revolution opened in the Royal Tennis Court complete with a statue and portrait busts of the most important signatories. Above the busts is a band painted on the walls containing the names of all signatories. Beneath the band the walls were painted in rich Pompeian red.

This new vision of the Royal Tennis Court also faded quickly. After the centenary of the oath in 1889, the court was just maintained but not handled with the care it required. There was even talk in the 1930s of converting it into a ping pong room for Senate functionaries who worked at Versailles.

Last year, Versailles undertook a comprehensive restoration program to return the Tennis Court to its 1883 condition when it was reborn as the Museum of the Revolution. Over eight months of work, restorers were able to restore the black cement floor, the Pompeian red wall paint, the names and laurel wreaths and decorative borders on the band, and Merson’s monumental painting.

The room is reopening on Friday after eight months of work, giving the public “a forgotten part of our history,” Catherine Pegard, president of the palace’s public administration, told AFP.

It is dominated by a monumental canvas, also restored, which was based on the famous unfinished work by Jacques-Louis David depicting the signing of the oath.