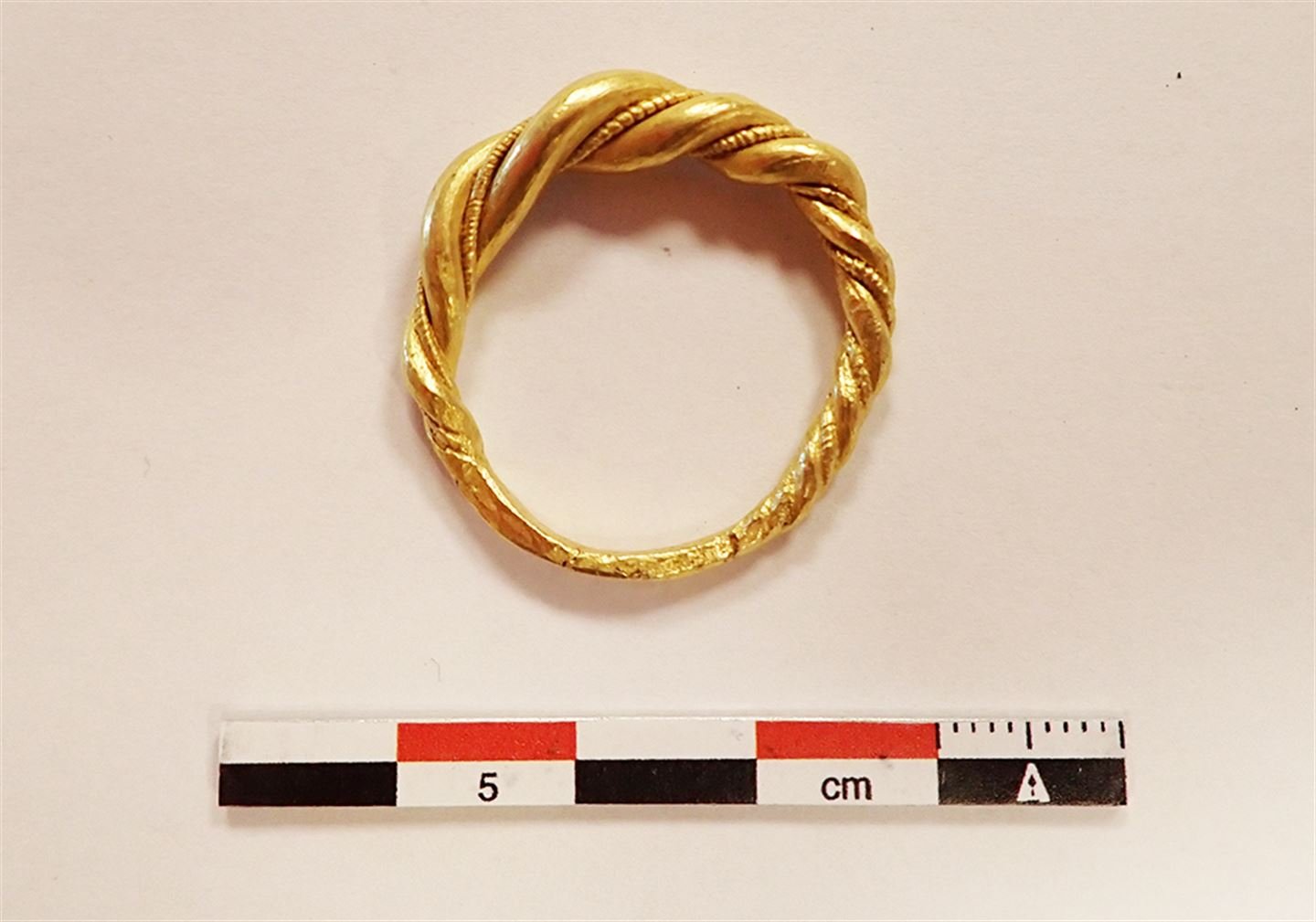 Mari Ingelin of Alver, Norway, hit the history buff’s jackpot when she found a gold ring from the Viking era in a box lot of cheap jewelry she’d bought at an online auction. The auction was an estate sale with lots of mixed objects packed into banana boxes. Ingelin bought the banana box containing some mall jewelry and trinkets. She was initially only interested in one of the items, but had to buy the whole box to get it. When sifting through her haul, the bright shine of yellow gold caught her eye.

The ring stood out from the other pieces. It was heavy and was more roughly made than the modern pieces. She consulted with her father-in-law and he suggested it might be really old, like Viking old. That’s when she contacted the Vestland County officials and alerted them to the find. County archaeologist Sigrun Wølstad examined the ring and confirmed that it was indeed a Viking artifact.

It has a twisted band with a thick, smooth strand entwined with a thin granulated one. It weighs 10.98 grams and is so wide in diameter it was almost certainly a man’s ring.

Unn Pedersen is an associate professor of archaeology at the University of Oslo. She studies artefacts from the Viking Age, and one of her fields of research is so-called non-ferrous metalworking – meaning for instance copper, silver, and gold.

“This is a really exciting find,” Pedersen says to sciencenorway.no on the phone from her summer cabin. “It is extremely rare to find such a gold ring from the Scandinavian Viking Age,” she says.

Pedersen confirms that the ring is a typical Viking Age ring.

“We have some very close parallels to it. There are some in silver, and some in gold that have this exact same shape,” she says.

Based on the photo, Pedersen also thinks the ring looks a little worn. It looks as though it has been used a lot. And it was most likely worn by a powerful Viking chief.

“Gold was rare during the Viking Age, there wasn’t a big supply of it anymore. So this would have been reserved for the richest and most powerful people in society,” she says.

There is no information about where the ring may have come from given its discovery in a sale bin. This type of ring has been found before in other parts of Scandinavia, usually in funerary contexts, as well as in Norway, but they are rare and there is very little known about their origins. The only way to find out more about this one is to take a sample of the gold and do metallurgic analysis, but of course that would damage the ring and these days conservators are reluctant to engage in invasive practices unless strictly necessary.

All archaeological objects in Norway predating 1537 are automatically granted protected status. Normally, the National Heritage Board allocates such finds to a local museum near where they were discovered, but since the find site is unknown, the Viking ring has been allocated to the University Museum of Bergen where it will go on display later this year.