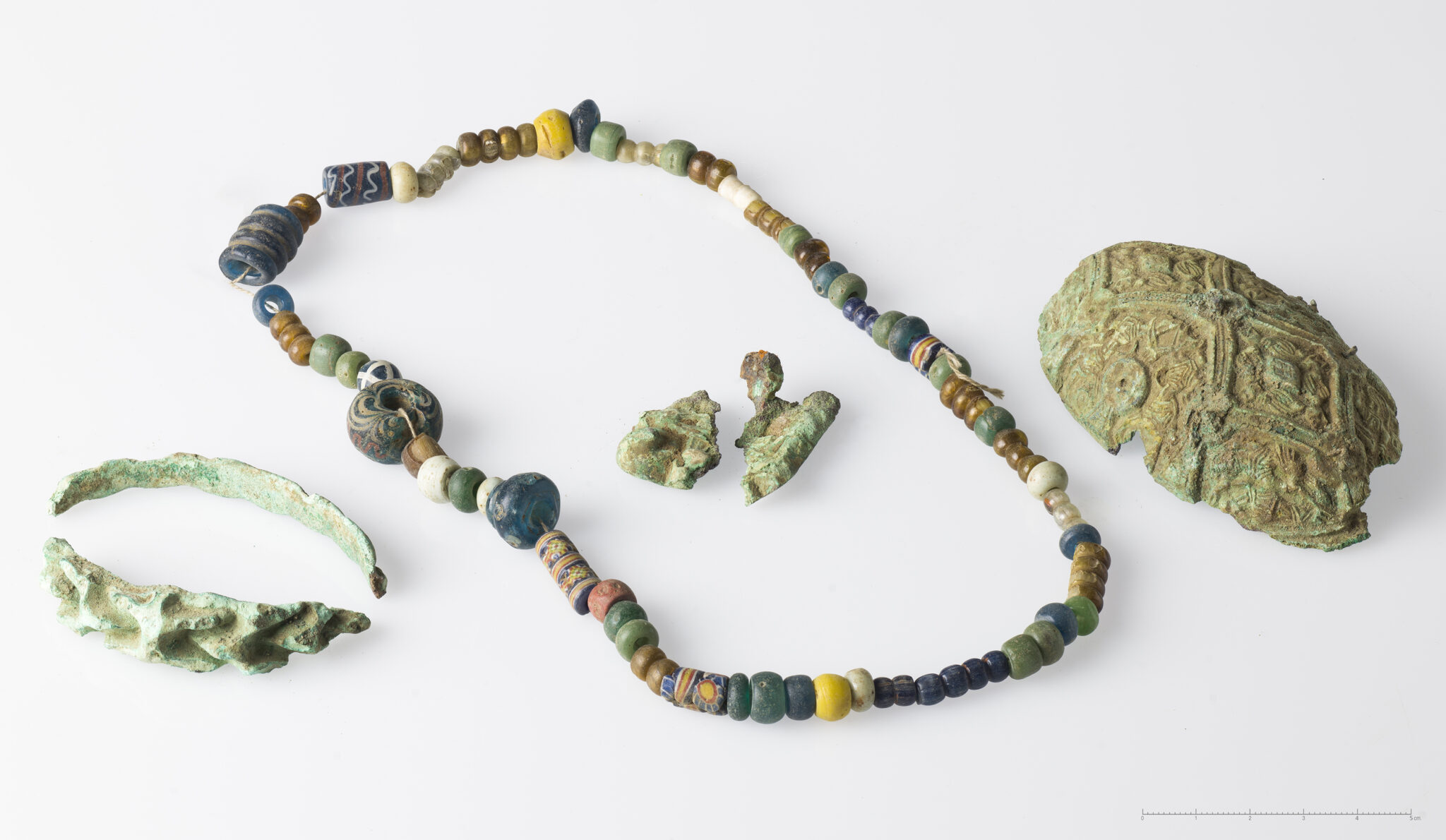 A previously unrecorded set of jewelry once worn by an elite Viking woman was donated to the University of Stavanger’s Museum of Archaeology in Norway. The set consists of two oval openwork bronze brooches with traces of the original silver plating, a string of more than 50 variegated beads and a bronze bracelet. A mosaic bead dates the group to around 850 A.D., the early Viking Age.

Museum archaeologists have been scouring the archives since the appearance of the jewelry to investigate the set’s possible origin. All the donors knew is that they were found in the tiny farming village of Frafjord on the southwest coast of Norway, an area with very little archaeological material from the Viking Age. They had no idea exactly where or when. One notable Viking find was made there in 1955: the remains of a funerary boat 23 feet long that was the grave of a woman buried with an axe, a shield, scissors, a heckle (a board used to split fibers for spinning) and an iron weaving sword.

There was no jewelry in the grave, however, which most certainly would have been part of her funerary attire. The two oval brooches pinned up an apron dress at the shoulders while the strand of beads connected the pins. A third brooch would keep a cloakwas the de rigeur attire for elite Viking women. Archaeologists now believe that the recently-emerged set is the jewelry buried with the Frafjord woman, lost before the ship burial was excavated.

“The Frafjord woman belonged to the upper strata of society, because not everyone was fortunate enough to wear such jewellery. The jewellery showed not only what status she had in this life, but also what social position she should take in life after death, and were thus important social markers, not only on earth, but also in the hereafter”, Kristine Orestad Sørgaard explains.

The Frafjord woman’s equipment testifies to flourishing international contacts and trade. Oval brooches were mass-produced in towns such as Kaupang and Ribe, while several of the beads may have originated in the Mediterranean and the Middle East.

Several of the beads come from a great temporal distance as well. Three blue glass beads date to the Early Iron Age, so they were hundreds of years old when the Frafjord woman was buried.

“It is regrettable that we have lost this knowledge and that professionals did not have the opportunity to investigate the site when the discovery was made, since we have thus lost a lot of important information.  […]

“Either this is heirloom, or the find is mixed with another find from another, much older grave. We will never know”, says Kristine Orestad Sørgaard, who emphasizes that this is the reason why it is so important that private finds are reported as soon as possible.