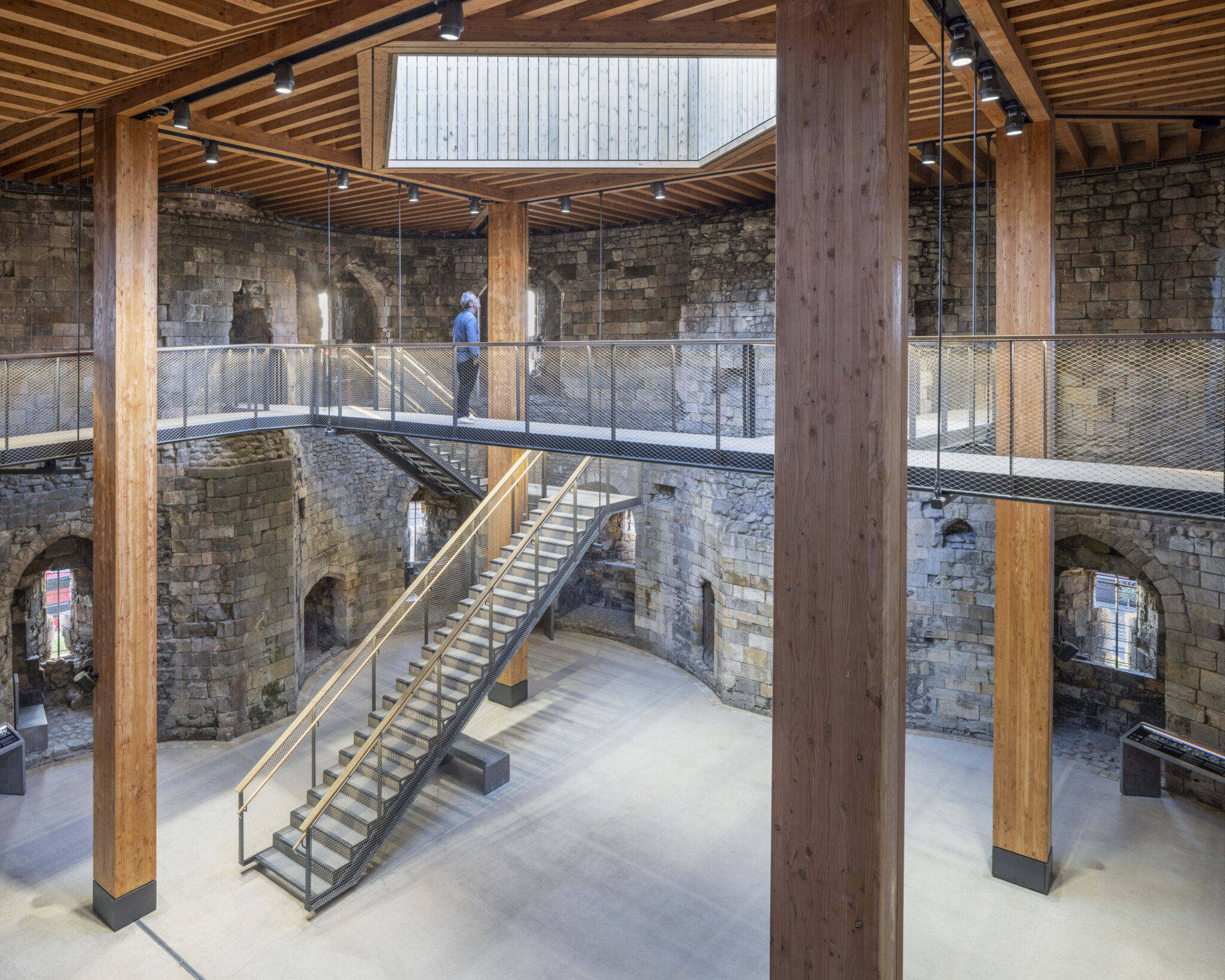 Clifford’s Tower in York is the only structure remaining from York Castle.

The original structure on the site was a timber Norman motte-and-bailey castle built by William the Conqueror in 1068. The wooden keep was burned down in 1190 in a horrific anti-Semitic riot where the 150 members of York’s Jewish community had barricaded themselves inside the tower from the wrath of the mob. Under violent attach from knights, a siege engine and the rioters, the Jews inside the keep killed themselves and set fire to the tower. The few who opted out of suicide and managed to escape the tower were massacred by the mob.

The present Clifford’s Tower was constructed on the ashes of this tragedy. Reconstruction began in the early 13th century, but the new stone keep would not be completed until the end of the century. York Castle would mainly be used for administrative purposes — prison, mint, briefly as headquarters of the Exchequer — not as an actual royal residence. It was not well-maintained. Accounts from the 15th century already report some of the buildings were in ruins, and there was a scandal in the 1590s around the gaoler of the castle purportedly trying to demolish the tower to sell the stone.

Clifford’s Tower saw real action in the English Civil War. Queen Henrietta Maria had it restored and a new wood roof put on in 1643 just in time for it to be taken by Parliamentarian forces in 1644. After the Restoration, the tower was garrisoned by troops who were notorious carousers. On April 23, 1684, they fired a ceremonial salute indoors and set the place on fire again. The fire gutted the wooden interiors and Henrietta Maria’s roof and the tower fell to ruin. Occasionally people used it as a stable or barn.

Finally it became property of the state in the 1915 and it was repaired and stabilized in the 1930s so it could be opened to the public for the first time in centuries. It was sort of a look-in attraction, however, a 15-minute visit at most to walk up the stone circular staircase to see some great views of York, including the Minster. There was no signage to speak of, limited information panels, and nothing to do inside but look up at the sky.

Now English Heritage has invested £5 million in a total transformation of the tower’s interior. Timber stairs and hanging walkways criss-cross up the tower walls, giving visitors access to long-hidden spaces like Henry III’s garderobe, ie, his toilet. It was a high-tech bathroom in the 13th century, complete with a built-in toiletries cupboard, a flushing spout that ran water down the lavatory hole all the way down and out the tower. Visitors who Escher their way up the walkways will reach the new roof deck with spectacular views of the city.

The new interior and roof deck at Clifford’s Tower has been designed by Hugh Broughton Architects, a leading contemporary architectural practice. Supported by four slender wooden columns, the ingenious structure sits on a raft foundation, which spreads the load without impacting on the archaeological remains beneath the tower. The practice has worked closely with conservation specialists Martin Ashley Architects to produce a scheme which sits respectfully within the heritage structure.

New interpretation will help place the tower in the context of both the historic York Castle and the city of York itself as well as introducing visitors to the tower’s long and turbulent history. Visitors can explore the castle’s founding by William the Conqueror, the tower’s role as the site of the tragic 1190 massacre and suicide of York’s Jewish community – one of the worst anti-Semitic episodes in English history – and the role of the castle as both a medieval royal stronghold and a garrison during the Civil War.

Integral to the new scheme is its soundscape. Layers of background sound will take visitors back in time, allowing them to experience the tower as it would have been at various periods in its long history. Visitors can engage with five key moments in that history with the help of the voices of local residents who bring the stories of fictional characters to life, each representing a different chapter in the tower’s past.