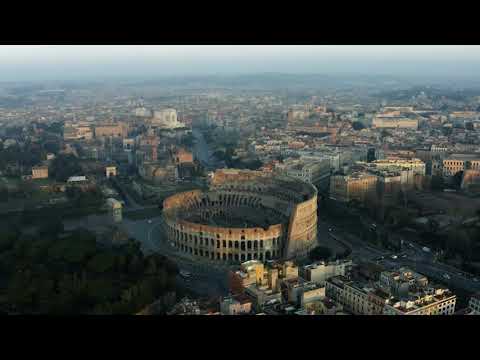 On Thursday Rome debuted a new high-tech way to experience its monuments: the Virtual Reality Bus. The small fully electric bus takes a maximum of 14 passengers on a 30-minute circuit of ancient Rome’s most important sites, from Trajan’s Column through the Forums, the Colosseum, the Palatine, the Circus Maximus, to the Theater of Marcellus and back again. While driving by, the magic of VR will transport passengers back in time so they can see the city as it was before the ruins were ruins.

There are no headsets or viewing accessories of any kind required. A transparent 4K OLED screen has been installed in front of each window with a motorized curtain between the screen and the window. When passengers want to see the monuments of ancient Rome as they are today, they raise the curtain. When they want to see what it would have looked like if they drove by 2,000 years ago, they close the curtain for the virtual reality view.

A sophisticated network of 5G broadband synchronizes the 3D virtual models on the screens to the exact location of the bus. Three GPS on different locations on the bus, a three-axis accelerometer, a magnetometer, a velocimeter and a surface laser document every jolt and jostle of the bus and realistic effects are then simulated in real time on the VR screens.

The bus is also equipped with digital speakers between every window and every other seat row, but to give the customers a truly immersive sensory system, they have taken a page from the great Smell-O-Vision stunts of the 1950s. A fragrance delivery system will evoke the scents of ancient Rome as the bus drives by temples, forums, the Colosseum and Circus Maximus. Inspired by the burned offerings to the gods and the assorted funks of the arena, a scent designed to match the site is released as you pass. Temples get you frankincense, myrrh, charcoal, guaiac wood, birch and vetiver grass. When you drive by the Colosseum, you’ll get hit with a wave of metallic aldehydes, civet musk, oud wood, costus, cistus labdanum resin and cumin. The Imperial Forums will serve oak moss, patchouli, sandalwood and amber balsam.

The bus runs every 40 minutes from 4:20PM to 7:40PM. English language tours are available only on the 5:00, 6:20 and 7:40 bus. The others are all in Italian. A regular tickets costs €16 and can be purchased online or at the ticket booth at Trajan’s Column.  Children younger than six ride for free.

Get a sneak peek at what this experience looks like in this video. Alas, there is no Smell-O-Vision on YouTube. Yet.