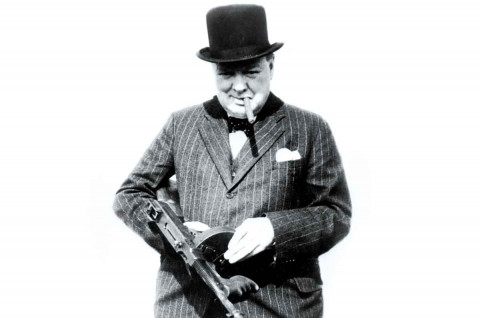 As the sensational subtitle – more befitting a penny dreadful than a biography – suggests, the Winston Churchill we meet in Tariq Ali’s new book is not the same person we know from Britain’s tabloid press. Quite the opposite. What we have here is a character assassination of a racist, snobbish, vain, villainous, bibulous Colonel Blimp.

There are now some 1,600 books on Churchill. What can Ali possibly add? As it is, the trick to writing an illuminating Churchill biography lies less in revealing addition than in skilful subtraction. Ali’s aim is to adjudge the appropriate circle of hell to consign Churchill to. Helpfully, his subject’s own pronouncements keep the enterprise chugging along. Women’s suffrage, Churchill argued in 1897, ‘is contrary to natural law and the practice of civilised states’. He blamed his Manchester by-election defeat in 1908 on ‘those sulky Irish Catholics changing sides at the last moment under priestly pressure’. No kinder words were spared for the Fenians (‘wicked people’) or the IRA (‘squalid murderers’). Suffragettes were roughed up on his watch and Irish nationalists dispatched by the paramilitary Black and Tans.

Famously a precocious critic of Hitler, Churchill was nevertheless besotted with fascism. ‘If I had been Italian’, he said to Mussolini, ‘I am sure I should have been whole-heartedly with you from the start to finish in your triumphant struggle against the bestial appetites and passions of Leninism.’ Ali reminds us that, before appeasement had a bad name, Churchill was, in fact, something of an appeaser. It was only after Munich that he fully abandoned hopes of cutting a deal with Hitler.

Then there are what Ali calls ‘Churchill’s war orgasms’, schoolboyish fantasies of guts and glory. Some of these make disturbing reading. ‘I do not understand this squeamishness about the use of gas’, he declared in 1920, justifying his authorisation of chemical weapons against the Kurds. ‘I am strongly in favour of using poisoned gas against uncivilised tribes [to] leave a lively terror.’

Bolshevism was a ‘sinister confederacy’ of ‘International Jews’. The Ashkenazi replacement of Palestinians, however, was another matter: ‘I do not admit that a wrong has been done to these people by the fact that a stronger race, a higher-grade race, a more worldly-wise race has come in and taken their place.’ ‘Churchill thinks “Keep England White” is a good slogan’, Anthony Eden recorded in his diary in 1955, as the Windrush generation arrived in Britain.

For most of his life, as Ali shows, Churchill was a man out of time. Out of step with public opinion, his nonchalance towards the Beveridge Report helped him snatch defeat from the jaws of victory in 1945. Likewise, his war record was far from immaculate. Disregarding his generals in his attempt to take the Dardanelles, Churchill’s campaign ended in humiliating defeat. The same fate met the British contingent of 15,000 sent to prop up the White Army and ‘strangle the Bolshevik baby in its crib’.

The fall of Singapore in 1942 came as a shock. Churchill’s surprise was genuine: ‘How came 100,000 men (half of them of our own race) to hold up their hands to inferior numbers [some 35,000] of Japanese?’ The end of the British Empire followed in short order, hastened in part by his own intransigence on Indian devolution.

Ali is no doubt a gifted writer, but I wonder if his jeremiad does complete justice to his subject. Churchill was a maverick Tory. He was, after a fashion, the grandfather of the welfare state, rather sympathetic in his Liberal period to the working classes, even if only in a ‘peculiarly de haut en bas way’, as Roy Jenkins put it.

He wasn’t, as Ali has it, itching to ‘call in the troops’ and put down the 1910 Welsh miners’ strike in the Rhondda. Rather, he tried negotiating a peace between labour and capital until riots broke out and he came under criticism for leniency in the Commons and the press. The army was called in, though kept at arm’s length from the protests to prevent violence. Ali passes over this in his account of Tonypandy.

Similarly, Ali dismisses Churchill’s defection to the Liberals in 1904 as ‘self-advancement’ without so much as pausing to register that as MP for Oldham, a cotton town, he could hardly stay put in the Conservative and Liberal Unionist coalition, increasingly open to tariff reform and hostile to free trade.

Ali tacks on large sections of working-class history to his biography, contrasting the anti-imperialism and socialism of the William Morris set and the Labour left with Churchill’s reactionary conservatism. His anti-hero, Ali repeatedly tells us, was a hated man.

The upshot is a skewed picture of Britain. We get the impression of a society riven by class conflict instead of the one where, in the 70 years after 1924, the year Churchill re-joined the Conservative Party, the Tories were out of power for only 18. It was, moreover, not until 1945 that a majority of Britain’s working class voted for Labour. Until then, it appears, the majority preferred Liberal and Tory paternalism. Historical balance sheets get a bad name, but surely, they’re more useful than hagiographies and obloquies. Indeed, a balance sheet can be an invitation to nuance.

For all that, Ali’s Churchill deserves to be read for its clarity and cosmopolitanism. The chapters on the occupation of Athens, the Bengal famine and Mau Mau rebellion are excellent primers. It is to publicise these that Ali wrote his book, as ‘we have never faced up to the truths of empire’. But is that really true? If history faculties are anything to go by, Ali’s views mirror majority opinion. Less than one in three Brits are proud of their former empire. Ali probably thinks that’s still too many. But I wouldn’t worry. Polls also tell us that one in five British teens think Churchill is a fictional character.