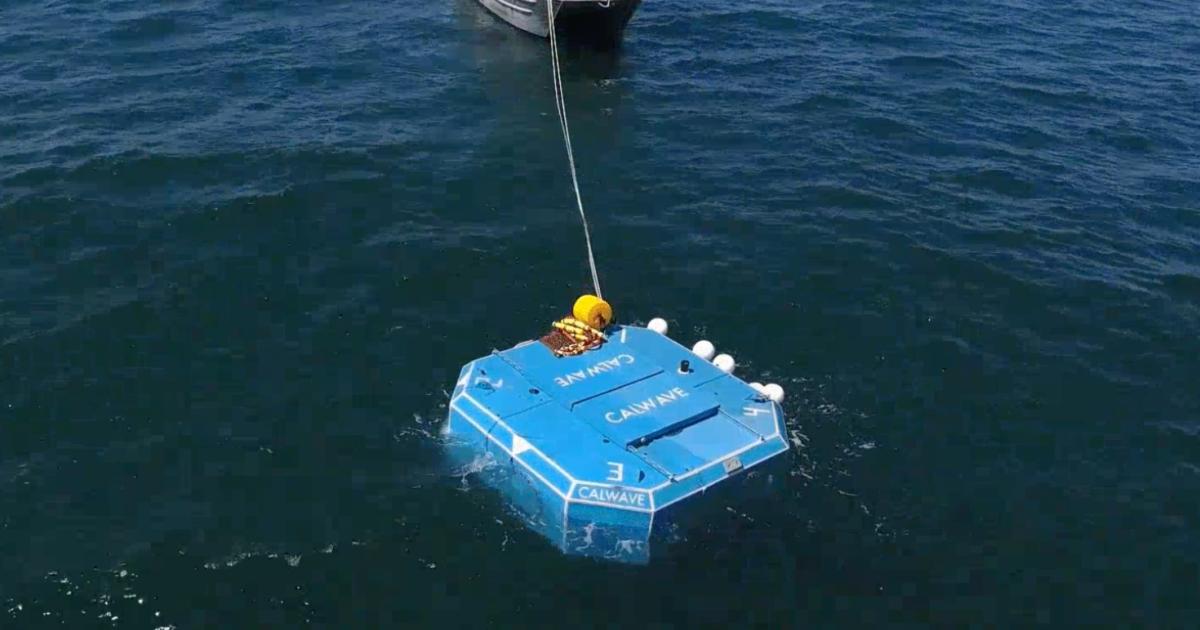 Over the last three decades, the quest to develop wave energy has summoned enough imagination to fill an H.G. Wells novel. Inventors have conjured up enormous machines resembling sea serpents and submarine launchers, built giant mechanical oysters and even created a “wave dragon,” all in hope of capturing the energy of waves and converting it to electricity.

Unfortunately, things did not end well for this cast of characters.

From Portland, Oregon to Porto, Portugal, from Scotland’s Orkney Islands to the Australian coast south of Sydney, one by one these sea monsters met their watery demise. Dozens of once-pioneering wave energy prototypes, for a variety of reasons, never made it to commercialization. And many young companies that created them went under and liquidated their assets.

Bringing any new renewable energy source to market demands extensive research and development, and the ocean can be an inhospitable place. Salt water is corrosive; powerful storms can damage machinery; and getting devices out into the open water simply to test them requires a significant amount of time and money.

The U.S. has only one active wave energy project, although it is a large one, with more than 1 megawatt of capacity.

As such, more public money is flowing in for development, testing and commercialization, including in the U.S., which has lagged behind Europe, the world’s ocean energy leader, largely because of limited public investment. American wave energy startups and the federal government appear eager to catch up. And it looks like they will soon get the opportunity to try.

The Department of Energy (DOE) in January awarded $25 million in funding to support eight wave energy projects that will make up the first round of open-water testing at an Oregon State University facility called PacWave, just off the Oregon coast. Scheduled to be operational in the fall of 2023, PacWave marks an important stepping stone for the sector because it will be the first grid-connected, open-ocean testing site in North America that is pre-permitted, which means entrepreneurs and researchers can test their devices without having to go through the lengthy regulatory process.

“It’s a big deal for the industry,” Bryson Robertson, director of OSU’s Pacific Marine Energy Center, told GreenBiz. “It’s a big deal to ensure that people who develop technologies in the Americas and other parts of the world can actually test them at scale without going through multiple years of regulatory processes and the associated administration and costs. They can bring their technology to us and deploy it so they can understand how it performs and get a lot of the necessary data and performance characteristics as they move towards commercialization.”

No sunshine? No problem

Ocean energy has captured imaginations because of its abundance and huge potential. According to the National Renewable Energy Laboratory (NREL), if we could harness all the marine energy available along the coasts of the United States — the waves, tides, currents and thermal gradients — it could provide enough power to supply more than half of the nation’s electricity needs.

Of course, building marine energy facilities up and down the entire U.S. coastline in an effort to capture the power of every last wave would not be practical or ecologically responsible, but consider this: The country’s total marine energy resource is 2,300 terawatt hours per year, or roughly 57 percent of U.S. electricity generation in 2019. Using just one-tenth of these resources would supply us with nearly 6 percent of the electricity we use, enough to power 22 million homes and eliminate one quarter of the U.S. coal fleet.

Ocean power could also help fill the gap left by other renewable technologies. Wind and solar combined can potentially supply 75 percent of the country’s electricity by 2035 and 90 percent by 2050, according to the DOE. And wave energy proponents point out that it could help provide the remainder in a complementary way while decreasing dependence on storage, because waves and tides are more predictable and reliable than the sun and wind. Waves churn day and night, and they grow stronger in the winter when there’s notably less sunshine in the northern states.

These renewable energy technologies not only can complement each other, but developers have begun to see ways to join forces and share space. Hybrid projects that aim to attach wave energy devices to offshore wind farms or floating solar panels are already under consideration in Europe.

CalWave Power Technologies was among the six companies and two universities to receive DOE funding in January — $7.5 million to test its wave energy converter designs for use in geographically remote areas or on small, local energy grids. The Oakland-based startup is interested in employing its technology alongside offshore wind, cofounder and CEO Marcus Lehmann told GreenBiz.

“We can take the electrical infrastructure that an offshore wind farm has and use that same infrastructure to export power to the grid,” Lehmann said. “A really good offshore wind farm has a 40 to 50 percent capacity factor, meaning the equipment is only used at half of its capacity per year. And if we balance the energy of a joint farm, then we can get the joint capacity factor up to 90 percent.”

A blueprint for what not to do

The EU leads the world in tidal and wave technologies, largely due to policies and early investment that have helped shepherd them toward commercialization. Over the last decade, Europe has invested more than $414 million in ocean energy research, development and innovation, through a variety of funding programs. And the EU has set a target of deploying 100 megawatts of wave and tidal energy capacity by 2025. As of last year, there was a pipeline of 17 projects, “more than enough” to meet the goal, according to Ocean Energy Europe.

By comparison, the U.S. has only one active wave energy project, although it is a large one, with more than 1 megawatt of capacity. The project launched in 2020, at the U.S. Navy Wave Energy Test Site near Kaneohe, Hawaii. Until PacWave opens its doors, this location — which recently received a $6 million infusion from the Navy — remains the country’s only grid-connected wave energy testing site.

Wave energy’s long, turbulent history has provided companies a blueprint, so to speak, for how not to do things.

“The Europeans have been at this and have been investing for a lot longer,” Robertson said. “The U.S. is definitely playing catch up to the Europeans. But we do have the advantage of sort of learning from them and what they’ve done and where they’ve made missteps.”

Indeed, wave energy’s long, turbulent history has provided companies such as Israeli startup Eco Wave Power a blueprint, so to speak, for how not to do things.

Founded in Tel Aviv in 2011 by Inna Braverman when she was only 24, the company has designed onshore wave energy technology that mounts on breakwaters, piers, jetties and other types of existing structures. Eco Wave deployed its first grid-connected commercial project in Gibraltar in 2016 and is at work on Israel’s first grid-connected wave energy installation. It also has a number of other projects planned, including a grid-connected 1 megawatt installation in Portugal that is part of a 20 megawatt agreement.

Braverman, who serves as the startup’s CEO, told GreenBiz that she and cofounder David Leb studied the history of wave power development and then basically did the opposite.

The now-defunct prototype for the Pelamis Wave Energy Converter, in Scotland in 2007.

“We understood when we established Eco Wave Power that if you don’t have something cost efficient, reliable, insurable, environmentally friendly and easily connected to the grid, you don’t have a business,” she said. “So we asked ourselves: How do we solve these problems? And we basically decided to take a completely different direction than the industry has in the past. They went far offshore, so we said, ‘We’re going nearshore and onshore.'”

Now the company has its sights set on the U.S. It began trading on the NASDAQ stock exchange in July; and in January, Eco Wave joined forces with AltaSea, a nonprofit that works with blue economy startups, on a pilot project at AltaSea’s accelerator campus at the Port of Los Angeles.

“The U.S. is a very important target market for us, and from our experience, the best way to penetrate a market is by the installation of a pilot, or proof of concept, project,” Braverman said. “Because when you’re speaking to people from different countries, they say, ‘It’s great to have something in Israel or something in Gibraltar, but we have different waters. So everybody wants to see something in their own backyard before going commercial with the technology.”

The road to commercialization

Increased public funding and the PacWave testing site should help move the wave power sector in the U.S. more rapidly toward commercialization. But there are also technological advances making the design and development process for today’s startups less cumbersome and expensive than it was for the first generation of wave energy developers. For Balakrishnan “Balky” Nair, CEO of Seattle’s Oscilla Power, that means there’s no real reason these technologies can’t be cost competitive.

“In order to design systems that can capture a lot of energy, you needed a lot of modeling and analysis hardware and software, the combination of which only really became available within the last decade,” Nair told GreenBiz. “Before that, you did not have the computing capacity and the ways to design and model these systems accurately. So with the older generation technology, people were largely taking their best guesses. They had to over-design the systems because they didn’t know what to expect, so they ended up with very high capex and then didn’t produce enough power. But these systems don’t reflect where we can get to as an industry.”

There’s no fundamental reason why this technology has to be more expensive than wind energy.

Oscilla received $1.8 million from the DOE to design a utility-scale, 1 megawatt wave energy system, the Triton, which can be either connected to or disconnected from the electricity grid. The company is also preparing to deploy its first commercial-scale demonstration of its smaller Triton-C system at the Navy’s testing site in Hawaii. The Triton-C, under development for more than a decade, is designed for remote and isolated communities, which typically depend on diesel-powered generators, making their power costs exceptionally high.

“With the hardware and software tools that have become available, there’s a generation of companies such as ours that we believe can get to cost points that are very competitive,” Nair said, adding that wave energy’s higher costs reflect its history and stage of development rather than the technology itself. “There’s no fundamental reason why this technology has to be more expensive than wind energy.”

Robertson believes the wave energy sector in the U.S. will start expanding in the next five years with a lot of small off-grid installations, to power ocean observation facilities, underwater vehicles and small remote communities. He sees the commercialization of large, utility-scale wave energy as more like a decade away. “We’ll see when PacWave comes online,” he said. “I’m bullish about the technologies, and there are really smart people working on them. But we’re all working with an incomplete data set until we get them out in the water.”