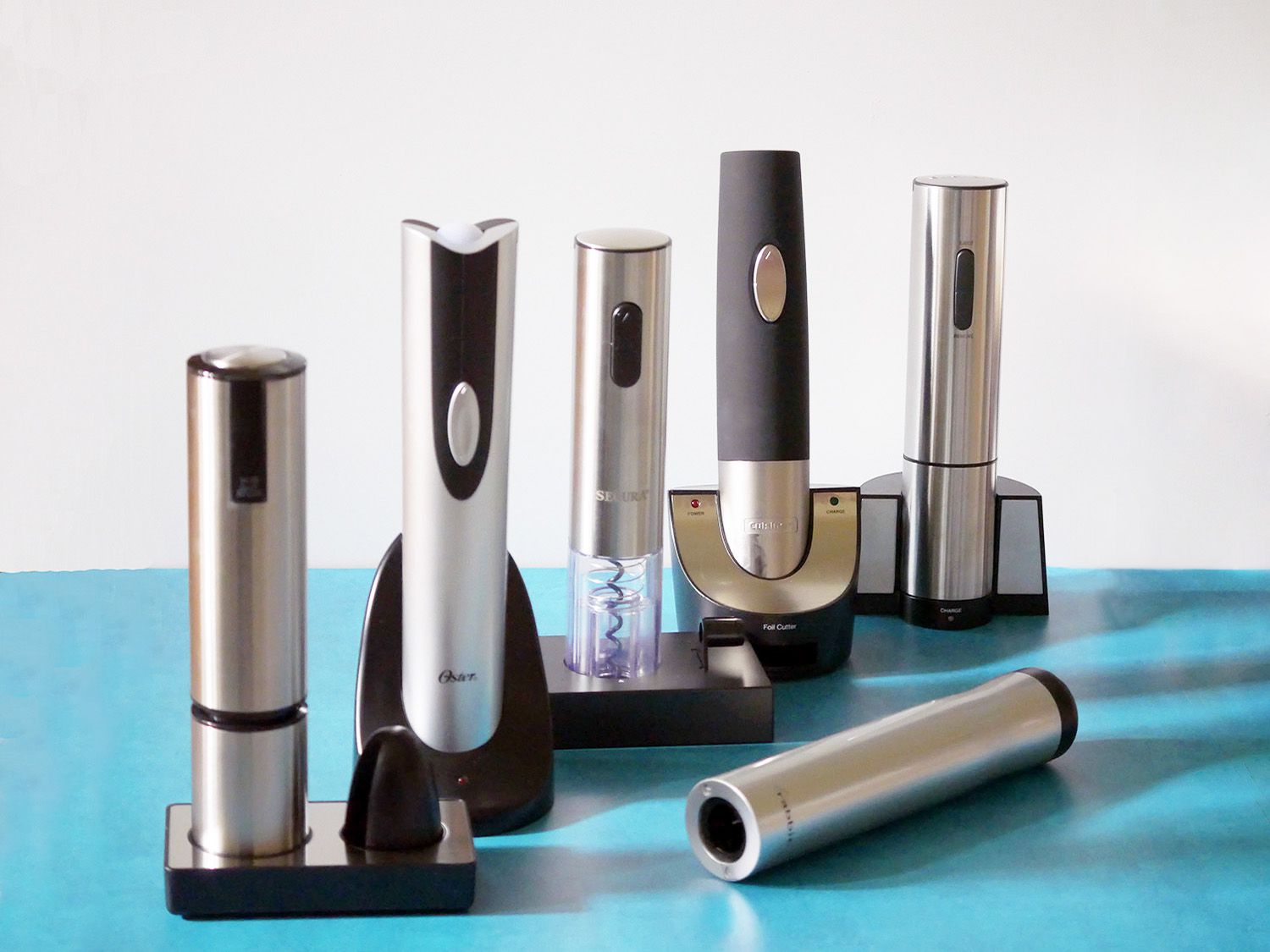 In 1795, Reverend Samuel Henshall patented the world’s first modern corkscrew; it had a simple (but effective) design comprised of a wooden, horizontal handle and a screw (back then, called a “worm”) with a concave wooden disk between them, which stopped the cork from inserting and breaking the seal of the cork in the bottleneck.

Since then, a myriad of corkscrew styles have come about, with two of the most popular being the waiter- and wing-style corkscrews. But, both require decent hand strength and finger dexterity, which may be troublesome for those with mobility concerns. Enter the electric corkscrew. These rechargeable wine openers use a small motor to turn the screw as it enters the cork, pulling it out of the bottle. Most can last six to eight hours on a single charge (making them great for parties, too) and, depending on the corkscrew, can open between 30 and 60 bottles of wine before you have to plug them in. We opened bottle after bottle of wine to find out which openers were durable and easy to use.

Even though it didn’t have up and down buttons, we liked the look and feel of this corkscrew. It requires the user to push down on the device, which compresses it and activates the corkscrew (when you stop pushing, it stops). To remove the cork from the device, you press down on a large button on the top. It was a powerful corkscrew that didn’t wiggle like other ones we tested; it also removed corks the fastest, in around 9.56 seconds. The one big downside: it’s quite expensive for an electric corkscrew.

This was a nice-looking electric corkscrew that did the job well. We liked the up and down buttons, which gave us some control. It was relatively fast, removing corks in around 10.7 seconds (a little over 1-second slower than our winner) and at around $30, it’s a reasonable price. Our one qualm with it is that it does wiggle a little bit when you push it into the cork, sometimes causing the screw to go in at an angle and grate against the side of the bottleneck.

At around $25 at the time of testing, this was a solid pick that entered the wine bottle nice and straight (at least, most of the time) and easily removed the cork. And for an extra $10, you can get the wine kit which includes two cork stoppers, a foil cutter, and a wine spout for smooth pours—a lot of bang for your buck.

Most Electric Corkscrews Wiggle While They Work

Instead of sitting securely on top of a wine bottle, most of the electric corkscrews we tested wiggled; they felt loose, and it was hard to keep them steady on top of the bottle. This caused problems when the corkscrew inserted into the cork, often entering at an angle and causing the screw to scrape against the glass. The exception was the corkscrew from Peugeot; it wiggled the least and, more often than not, went in fairly straight. The Oster and Cuisinart Electric Wine Opener also did a decent job most of the time, though they were definitely more wiggly.

Buttons Were a Good Thing

Most of the electric corkscrews we tested had two buttons: a down button to insert the corkscrew and remove the cork, and an up button to push the cork out the corkscrew when done. We liked this more than automatic corkscrews like the Rabbit, which was pressure-sensitive (read: if you push down onto a bottle with the corkscrew it automatically starts). Having buttons (that started when pressed and stopped when released) helped us steady the corkscrew and have more control over the process. However, while our winner didn’t have up down buttons, it still required you to push down on the device to start, but if you eased up on the pressure, it stopped—it was kind of a giant button, in effect.

However, Automatic Starts Were Very Bad

The Rabbit corkscrew started automatically with the slightest hint of pressure, making it tricky to time it right. If you so much as nudged the bottle with the bottom, it started the cork extraction process (complete with cork extrusion cycle at the end) and there was no way to stop it. There were no buttons or features that let you control what was happening, which we disliked.

Speed and Number of Bottles Per Charge Were Added Bonuses

While some corkscrews were faster than others, it was by a small amount, and we didn’t mind waiting a few milliseconds more for a corkscrew to finish. That said, our winner was the fastest of the bunch, and at more than $100, we would expect it to be. But when it comes to bottles per charge, unless you’re hosting a real humdinger of a party and opening 30-plus bottles of wine, most of these electric corkscrews will last a while before needing to be charged.

All of the electric corkscrews, save for the Rabbit, came with separate foil cutters. To use them, you place the doodad on top of the wine bottle, turn it, and it cleanly cuts through the foil. We preferred these (even if we’d probably lose them, if we’re honest) over the supposed “built-in” one on the Rabbit, which didn’t remove the foil but rather just punctured through it, leaving a jagged mess behind. And if you lose your cutter, you can always just use a standard waiter-style corkscrew’s cutter to remove the foil first.

The Criteria: What to Look for in a Good Electric Wine Opener

We preferred corkscrews that didn’t have automatic starts (up and down buttons or an intuitive pressure function were best) and that inserted into the cork straight, without much wiggling. Fast corkscrews were also nice, though not a dealbreaker.

What we liked: With an intuitive user interface and a strong lithium ion battery-powered motor that removed corks quickly and easily, this fancy corkscrew lived up to its price tag. We also thought it was the most stable of the bunch: the corkscrew entered the cork easily and in the center pretty much every time—no crumbling corks to be seen.

What we didn’t like: At over $100, this is one pricey electric corkscrew.

What we liked: This was a stylish, sleek electric wine opener that featured up and down buttons, making it very easy and intuitive to use. It claims to be able to remove up to 50 bottles per charge, which is on the high end, and it also was decently fast at removing the cork, taking around 10.7 seconds to remove it.

What we didn’t like: It sometimes went into the cork on the side or at an angle, but if held straight and tight, this wasn’t as much of a problem.

What we liked: This was a lightweight corkscrew that inserted straight into the center of the cork, most of the time. We liked the accouterments that came with the expanded wine kit, including two cork stoppers and a wine spout for pouring.

What we didn’t like: It occasionally would wobble and insert on an angle into the cork, grating against the glass. It was the second slowest opener, taking around 11.31 seconds to remove the cork from the bottle. The up and down buttons also required little effort to press and engage.

How do electric corkscrews work?

Many consist of a screw inside the device, which descends into the cork when a button is pushed. As the screw goes through the cork, it lifts the cork out of the bottle and into the corkscrew.

How do you remove a cork from an electric corkscrew?

Most electric corkscrews feature a button that pushes the cork out of the device.