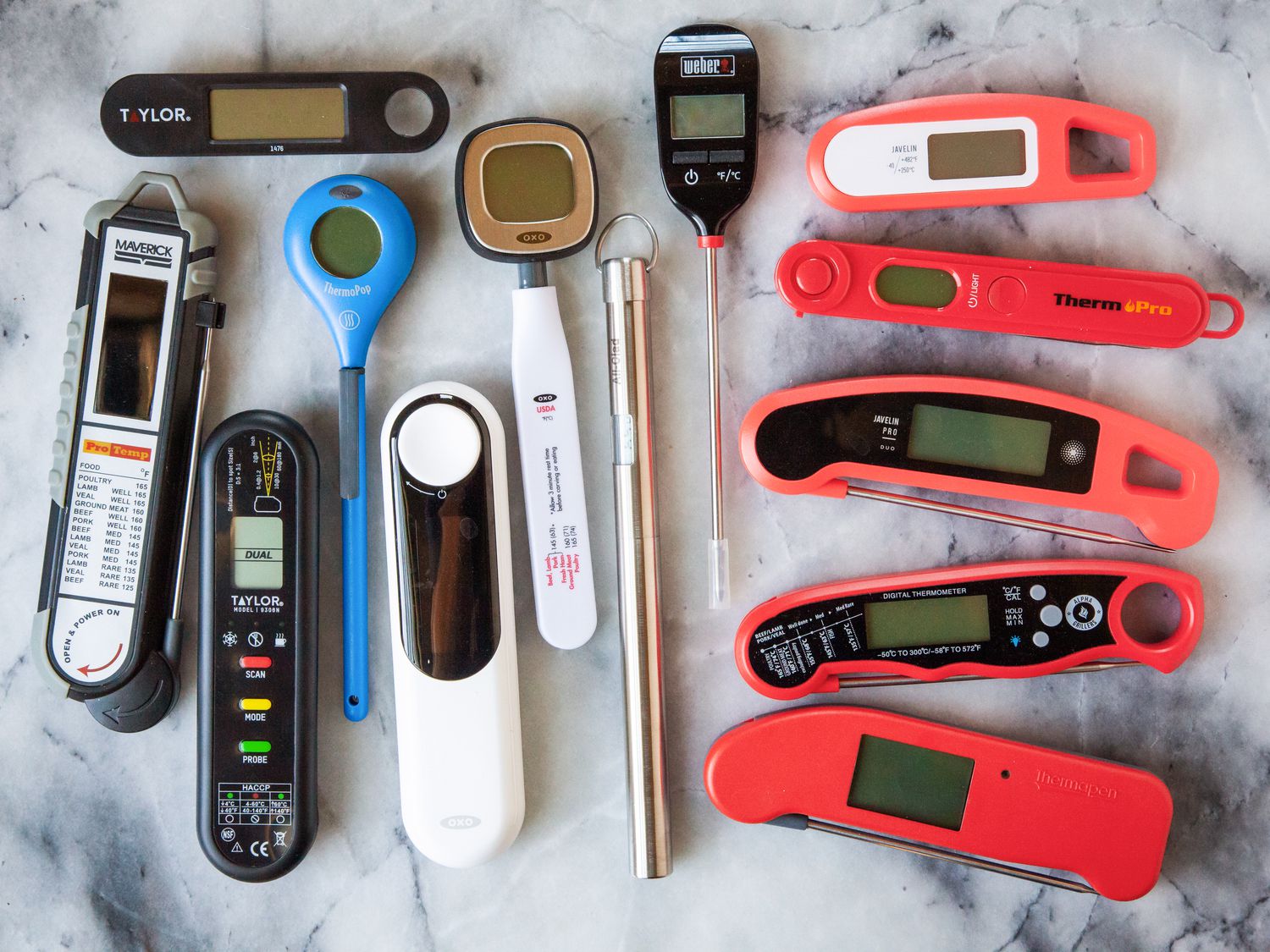 One of the most popular, well-rated thermometers (and a long-time Serious Eats favorite), the Thermapen Mk4, was recently replaced with a new model: the Thermapen ONE. So, we decided to test it, along with 12 other thermometers. We also included our two favorite inexpensive thermometers in the lineup (the ThermoWorks ThermoPop and Lavatools Javelin Digital Instant-Read Thermometer), as sort-of control models to compare the performance of similarly-priced thermometers to.

The Thermapen ONE is just as good as the Mk4 (we had an Mk4 on hand and were able to compare the two). The ONE was accurate and easy-to-use and delivered temperature readings faster than any of the thermometers we tested.

The OXO Thermocouple thermometer was also accurate and fast. Its stand-out features included a probe that rotated 225 degrees, making it easy to use if you’re left-handed. Its black digital screen and white digits made reading the temperature easy in any setting, whether it was a brightly lit kitchen or the dark interior of an oven.

The Lavatools Javelin Pro was accurate and nearly as fast as the OXO. It had a large screen and sharp digits and a great automatic backlight. It also had the ability to hold the temperature reading once taken. At half the cost of the Thermapen ONE and the OXO Thermocouple, it’s well worth its price. You can also check out our review of inexpensive thermometers and we still think theThermoWorks ThermoPop and Lavatools Javelin Digital Instant-Read Thermometer are top-notch picks, too.

How Instant are Instant-Read Thermometers?

Despite the name, most good “instant-read” thermometers (which some people call meat thermometers) actually take a few seconds to register the right temperature. The OXO’s readings were, for the most part, within three to four seconds, while the Lavatools Pro’s were between three to five seconds. However, the Thermapen ONE registered temperatures the fastest—between two to three seconds, on average. In comparison, the lower-performing thermometers took anywhere from 10 to 21 seconds.

Considering the act of just opening an oven can drop the interior temperature up to 50°F, the longer you have to wait, the more heat loss there will be. Worse, though, is having to stick your hand in a hot oven or over a blazing hot stove (like when deep-frying) to take the temperature. So, speediness also affects usability.

Which Instant-Read Thermometers Are the Most Accurate?

The fastest reading thermometer means nothing if the temperature is wildly off or inconsistent. Testing a sous vide bath set at 134°F, ice cold water (32°F), and boiling water (212°F) gave us a fair assessment of how accurate each thermometer was.

It was actually no surprise that the fastest thermometer, the Thermapen ONE, was also one of the most consistent and accurate. The other two winners, the OXO Thermocouple and Lavatools Pro also gave consistent and accurate temperatures. For all three thermometers, the sous vide bath consistently checked in at 134°F, while the ice water was 32 to 33°F. The three thermometers read boiling water consistently at 211°F. The worst-performing thermometers were often off two to three degrees—and, again, they were also the slowest. It was a double whammy, if you will.

The thermometers that were easiest to read were the ones we’ll reach for again and again. They had larger screens, had decent backlights, had higher contrast numbers, and auto-rotated so you could read the temperature at different angles. The Thermapen ONE’s screen was an improvement over the previous model, the Mk4. The ONE’s screen was brighter and had a more neutral-white backlight, making it easier to read. Our other two favorite thermometers had stand-out usability features as well: The Lavatools Pro had a large screen with a light blue backlight that made it easy to read and the OXO had a black screen with bright, white digits that really popped.

Conversely, thermometers with small screens or bad backlighting (or both) were harder to use. It’s worth noting that not all backlighting is the same. Some models had bright lights that caused glare and made reading the screen more difficult. Others didn’t have backlighting at all, making them harder to read in dim situations (i.e. in an oven when roasting a chicken or, perhaps if you have a low-lit kitchen).

It’s also worth noting that most of the higher-end thermometers featured a fold-out probe, rather than a stationary one. The latter comes with a cover to house the probe when the thermometer’s not in use. Fold-out probe models likely have larger screens, are more compact, are possibly easier to store, and are easier to hold, as they simply offer a larger body to hold onto. Plus, you can use them vertically or horizontally. We still think the stationary ThermoWorks ThermoPop is a phenomenal thermometer (especially for the price). But, if you’re trying to decide between the Thermapen ONE and the ThermoPop and have the budget, it’s hard to beat the versatility and the features of the ONE.

The Criteria: What We Look for in an Instant-Read Thermometer

Most of the thermometers we tested were fairly accurate (off about three degrees max, which isn’t ideal but is something most folks can probably live with, like a clock that’s accidentally set three minutes faster but you wait years to fix). However, the best thermometers were not only accurate. They read temperatures quickly, were comfortable to hold, had an easy-to-read screen with bold numbers, and had helpful features like automatic on/off (no having to press a button) and an automatic backlight.

The ONE also automatically lights up in dark situations, making its temperature readings easier to see. And the perimeter of this thermometer’s body had a gray nonslip rubber strip that made holding the thermometer easy, even if your hands were wet or greasy.

The ONE also automatically turned on when you pulled the probe out or, if the probe was already out, when you picked it up, which meant not having to fumble with an on/off button. Its waterproof rating of IP67 was the highest of all the thermometers we tested, which made it easy to clean and gave you added security should kitchen accidents happen,

What we didn’t like: The screen didn’t have as much contrast as the OXO or Lavatools Pro, both of which are slightly easier to read.

What we liked: The OXO thermometer gave accurate readings across all of our temperature tests. The thermometer was slightly slower than the Thermopen ONE, but the reverse black screen and white digits make the OXO incredibly easy to read.

The pull-out probe can rotate to a 225-degree angle, which made it the easiest to use thermometer for left-handed people. Its screen auto-rotated 180 degrees as well.

What we didn’t like: However, because the numbers only rotated 180 degrees, not 90 degrees, if you pull out the probe 180 degrees and use the thermometer vertically, you have to turn your head to read the screen. The batteries were also a bit of a pain to install, requiring a screwdriver with a small Phillips-head. Other thermometers already had the batteries installed and ready to use.

What we liked: The Lavatools Javelin Pro was also very accurate and unlike the Thermapen ONE or the OXO Thermocouple, the Pro can read temperatures down to the 0.1 decimal. This seems like a great feature, but in practice probably isn’t something most folks need in their home kitchen. (Both the Thermapen and OXO have an option to display temperatures down to the 0.1 decimal as well, but the default factory setting is to give whole number temperatures.)

The Pro’s speed is comparable to the OXO, with an average reading of about four seconds. The automatic backlight screen had large digits that made it easy to read the temperature. The screen’s digits flipped upside-down if you plan on reading the screen in that orientation, with the pull-out probe rotated 180 degrees. The Pro also had a “hold” feature that allowed you to stop the temperature reading as you put your finger over the starburst-shaped sensor, so you can bring the thermometer closer to you to read it, if need be. Just keep in mind that hold feature stops the temperature at whatever it is when you press the sensor, not necessarily at the thermometer’s final reading.

What we didn’t like: The Pro’s temperature maxes out at 482°F while the ONE and OXO both max out at 572°F. Rated at a water resistant IP65, you can rinse it with water but not immerse it.

How does the Thermoworks Thermapen ONE compare to the Mk4?

At first glance the Thermapen ONE looks almost identical to the Mk4. The main physical difference being the old Mk4 has a gray rubber strip on the end of the thermometer body, which allowed for a waterproof seal where the battery compartment went.

The newly designed Thermapen ONE moved the battery compartment to the back of the body, making that gray strip unnecessary. This results in a cleaner, more streamlined design. Beyond the superficial aesthetics though, the Thermapen ONE has a brighter screen that lights up a neutral white, compared to the Mk4’s warm, dim, yellow light. This brighter light gives more contrast to the screen, making the temperature easier to read.

But the biggest change is the speed at which the temperature is read. The Thermapen ONE claims to give accurate temperatures in one second. In practice, we found it took a little longer, but was, indeed, faster than the Mk4.

Can you re-calibrate an instant-read thermometer?

Unlike analogue dial thermometers that can often be re-calibrated with a simple pair of pliers, re-calibrating an instant-read thermometer is a little more involved. A few instant-read thermometers, like the Thermapen ONE and Lavatools Javelin Pro will give you an option to change the internal temperature reading up and down to match known temperatures (like boiling water or ice water). But this requires you opening up the battery compartment and manually adjusting things.

How fast is an instant-read thermometer?