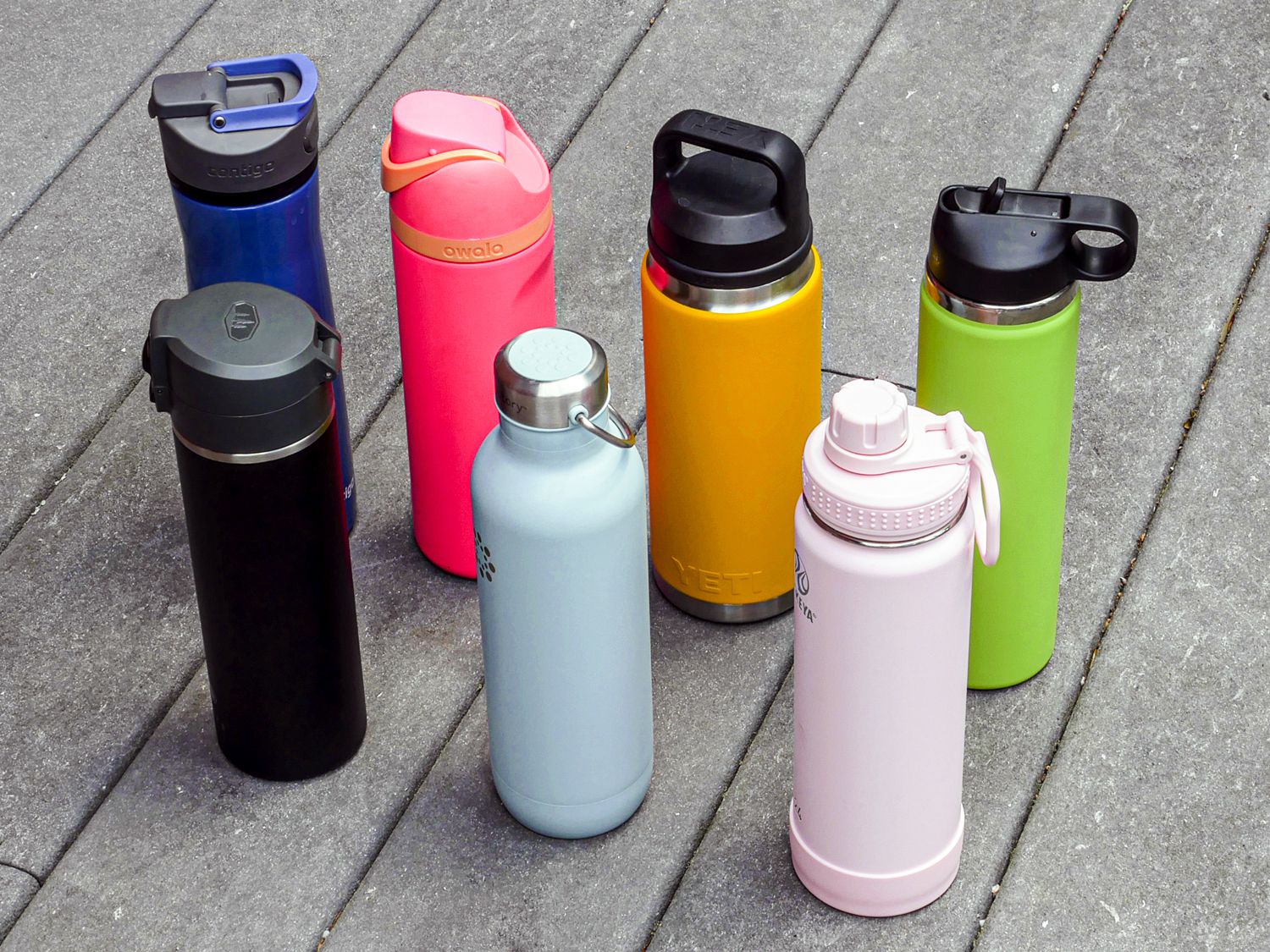 My water bottle and I are inseparable. I stick it in my car cup holder when I run errands, bring it to the gym, and tote it around in my purse. That all being said, I have some high standards: I want a smooth sipper that won’t splash or leak; the top should be easy to open and close, and it shouldn’t have too many hard-to-clean nooks and crannies. It should also keep water reasonably cool if you throw a few ice cubes inside (and the ice should easily fit through the opening). I award bonus points if it fits into my car cup holder and bag.

I tested seven stainless steel models to find a great everyday water bottle. Some had built-in straws, others had simple screw-off tops, and all of them promised decent cold retention. (Note: all but one had a 24-ounce capacity—the outlier was 26 ounces). Here’s what I found.

I loved that this bottle had two sipping choices—a straw and a chug spout. Sipping through both was smooth and drip- and spurt-free. It was also leakproof, had a nice grip because of two indents on either side, and fit snugly in a car cup holder. Overall, this is a bottle I’d use all the time.

If you don’t want to spend more than $20 on a water bottle, the Contigo Courtland Chill is a great choice. It had an easy-to-use lock and was smooth to drink from thanks to its narrow opening (shaped like that of a coffee cup lid), even though it didn’t have a straw option. It also did an impressive job keeping water chilled.

The Hydro Flask is a great no-frills water bottle that does a solid job on all counts. I liked that the body was narrow and slim—it made it ultra-portable. Its cap had a built-in straw that was easy to drink from and its wide mouth made it a cinch to fill.

Straws Made for the Smoothest Sipping Experience

Five of the water bottles I tested featured screw-on lids with large openings for “chugging” water. This style of bottle was more prone to splashing and overall messier drinking. Two bottles featured straws, which direct water more precisely than a chug-style opening; I preferred this style for a smooth (and splash-free) sipping experience. My favorite bottle actually featured both a straw and a chug-style opening, allowing me to drink in big gulps or small sips. Variety is the spice of life, right?

An Intuitive Lid with a Smaller Sipping Opening Was Best

I preferred water bottles that were easy to use in terms of lids and locking mechanisms, like the Hydro Flask, which had the simplest lid design of them all: it featured a screw-on lid with a straw mouthpiece that lifts up—easy peasy. The GSI Microlite 720 Flip, while leakproof, had a rather confusing lock mechanism, and the lid required me to actively pull it open instead of automatically popping open once unlocked, which I expected. The sipping port was also inset, and I found it difficult to get my mouth close enough to drink cleanly. The Yeti Rambler bottle featured a two-component lid (a plastic chug section and a separate cap to cover it), which made for some messy mistakes; on more than one occasion, I accidentally took off both pieces and splashed myself with water. Generally, water bottles with simpler and smaller-sized drinking openings (like the Owala, Contigo, and Hydro Flask) were less messy, and I preferred drinking from them.

Most Bottles are Great at Keeping Water Cool

To test cold retention, I filled each bottle with 100 grams of ice and 300 grams of water chilled to 37°F. During the temperature checks, I noticed that the water first went down to around 34°F, likely due to the ice chilling it. Most bottles’ ice completely melted around the 12-hour mark, but the water was still very cold, averaging 34°F. While the GSI (which has double wall insulation) kept water chilled the longest (it was at 38°F after 28 hours), usability factors brought it down in our rankings.

The takeaway from this testing was twofold: first, price didn’t have a massive effect on cold retention—the cheapest bottle kept water chilled longer than some pricier models. Second, I learned that cold retention was actually rather irrelevant, since all bottles kept water cool (sub-50°F) for at least 24 hours, and most people won’t require their everyday bottle to do more than that.

I preferred water bottles with base diameters of 2.75 to 3 inches—they were easier to fit into car cup holders and generally made for more portable bottles. The Hydro Flask and Contigo both had bases that were 2.75 inches in diameter, making them ultra-portable. While the Owala had a slightly larger base (3 inches), it was still narrow enough to snugly fit into a cup holder. The Yeti, which had a base diameter of 3.25 inches (the largest of the lineup) was too large to fit into a cup holder and too bulky to be easily placed in a purse. That said, if you’re carrying it in a hiking backpack on the trail, size probably won’t be a problem, but weight might: it was 1.4 pounds empty, making it the heaviest bottle in the lineup.

While the Owala and Hydro Flask got dinged up quite a bit during our durability testing, I found that although being aesthetically unappealing—the dents had no effect on the overall experience of drinking from the bottle. However, both brands do sell silicone boots to help protect the bottom (this one from Hydro Flask and this one from Owala, although Amazon sells lots of third party ones—just check the dimensions). The Lifefactory did fairly better than the other bottles during the durability test, likely because of the built-in silicone cap on the base.

There Were No Issues with Leaks

I conducted a leak test with the bottles closed/lids capped, and none of them leaked. However, if you were to have the bottle open, yes, it would spill water if knocked over. The Hydro Flask will do this if you leave the straw sipping part up—once it’s down, I didn’t have any issues.

The Criteria: What To Look for In a Stainless Steel Water Bottle

The best stainless steel water bottles have a small base, don’t leak, are smooth to drink from with a small mouthpiece, and have a simple lid design. I also preferred bottles with a straw, which made for smoother sips. Bottles with a base diameter of 2.75 to 3 inches were generally more portable, and the lighter the bottle, the better in terms of carrying comfort.

What we liked: This water bottle was a pleasure to use and drink from overall, but my favorite thing about it was the dual straw and chug mouthpieces. Both were smooth to drink from and gave you the choice of taking small sips or larger gulps (if you’re really thirsty). I also liked the lock-lid, which popped right open when the button was pressed and ensured a leakproof seal.

What we didn’t like: The bottle was a tad wider (by .25 inches) than our other two top picks, but I was still able to fit it into a car cup holder and tote bag. The base dinged up quite a bit when dropped, but the dents didn’t affect usability. That said, you can buy a bottle boot to protect the bottle’s bottom, if looks matter to you.

What we liked: The Contigo punched above its weight, and was a fraction of the price of some bottles in our lineup. I loved the smooth but grippy bottle body, and the lid had an intuitive and easy to use lock system that prevented leaks. And even though it didn’t have a straw, the mouthpiece was quite small, which made for a smooth sipping experience. It also beat out some of the pricier models (*cough* Yeti *cough*) when it came to cold retention. It was one of our favorites as far as portability, too.

What we didn’t like: I would have preferred if there was a straw option, but this was still a great water bottle. It got minor dents and dings during our durability testing, and the narrow mouthpiece was slightly hard to clean, but neither issue was a deal-breaker.

What we liked: Lightweight, easy to use, and with a simple straw for sipping, the Hydro Flask was a solid, no-frills water bottle. It also had a small base which made it perfect for bringing along in the car.

What we didn’t like: The only downsides were that it was expensive and it dinged up fairly easily—but the good news is you can buy a removable, silicone boot to protect it. The only other qualm I had was that sometimes the water exuberantly spurted from the mouthpiece upon sipping.

How should I clean a stainless steel water bottle?

The best way to clean a stainless steel water bottle by hand is with a bottle scrub brush and hot, soapy water. A dishwasher is also an option for bottles that are dishwasher-safe, but be sure to note which parts are top rack-only.

How often should I clean my stainless steel water bottle?

If you use your bottle often, we recommend cleaning it every day use since minerals, mold and mildew can build up in the lids and at the bottom of the bottle. Yuck!

Can I put hot coffee or other hot liquids in a stainless steel water bottle?

While some of the bottles we tested did claim to keep hot liquids hot, we don’t recommend putting hot coffee or tea in a water bottle; many of the sipping ports aren’t ideal for sipping hot drinks and coffee can also leave an unpleasant odor. Instead, use a designated travel mug.

Yes, if you don’t clean your water bottle after using it, all kinds of unideal stuff can build up over time, including bacteria.