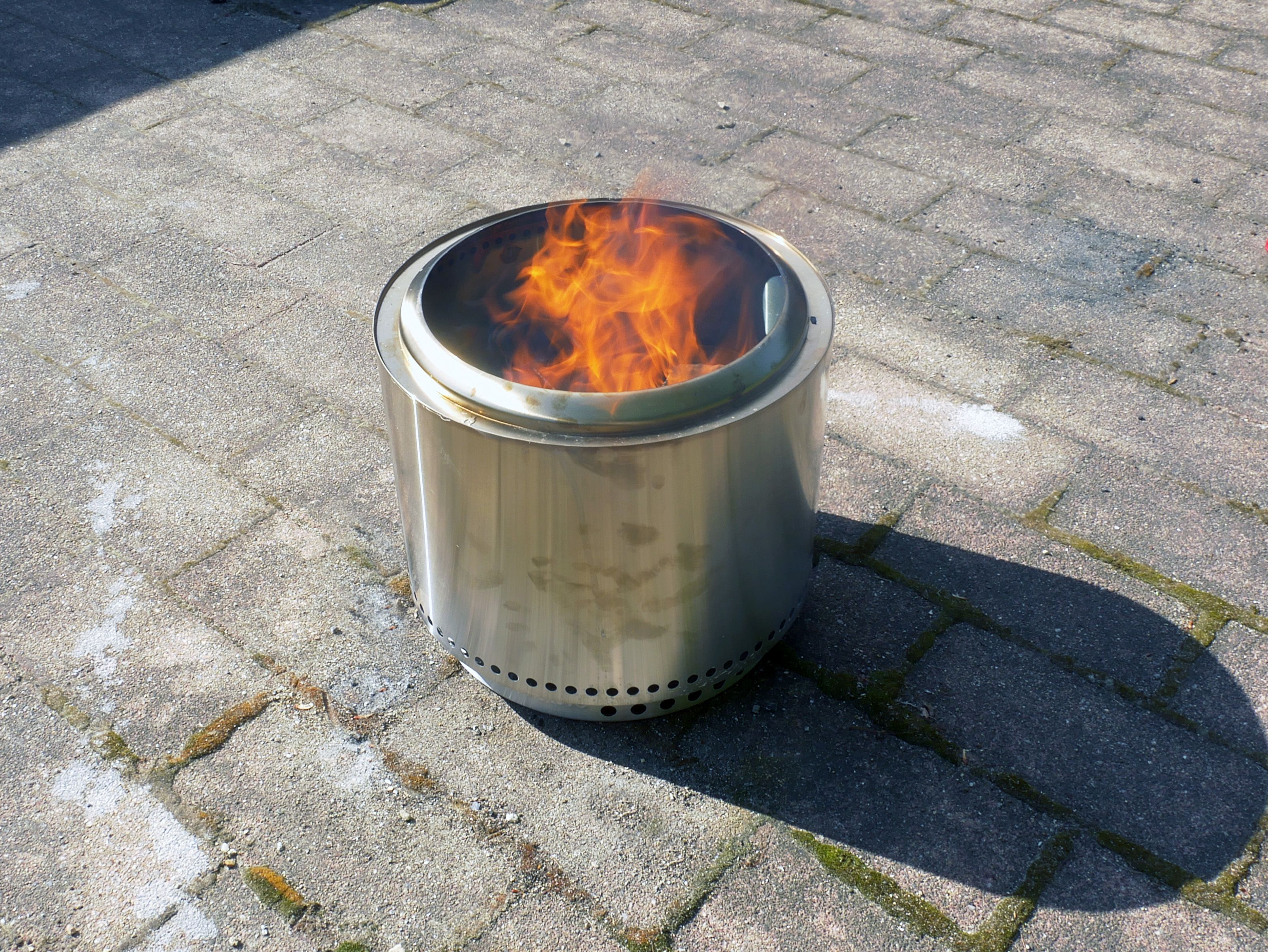 Here at Serious Eats we love outdoor cooking—when the weather is nice, you can bet we’ll be out there priming our fuel lines and scrubbing our grill grates. But live-fire cooking? I always thought I’d leave that to the Francis Mallmann’s of the world (he’s a renowned Argentine chef with a penchant for live-fire cooking). Sure, I might stick a marshmallow or a hot dog on a twig and toast it over a campfire, but that’s the extent of it—until now.

After seeing tons of ads for the Solo Stove—a metal fire pit that looks vaguely like those dryer drum pits people make when their machine kicks the bucket—I decided to see if it was worth all the fuss (and money…is it worth getting even if you already have a grill?). But I didn’t just want to light a fire and toast a few marshmallows; I wanted to cook whole meals on it.

So I set myself up with the Solo Stove – Bonfire Fire Pit (the mid-sized model) and paired it with the Bonfire Cast Iron Grill Top + Hub, which consists of a riser platform and 17.5-inch round cast iron grill top. I also used a 16.75 x 9-inch Lodge Reversible Grill / Griddle with the hub and stove to see if I could cook without the proprietary grill grate (I still used the hub because I needed something to elevate the Lodge from the flames, or else the food would be scorched).

Then, I got cooking to see if this fancy fire pit plus accoutrements could make a Mallmann out of me (or anyone).

First, I assessed the stove’s portability, since that’s one of its big claims to fame. The stove weighs 20 pounds and comes with a carrying bag that slips over it, which worked quite well; I found it to be overall pretty portable and the bag made it easy to carry. That said, it is bulky (the stove measures 22 x 22 x 17 inches), and I wouldn’t want to walk miles carrying it, but it’s portable enough to bring to a campsite or a friend’s backyard (or to just haul out of the basement when the weather is nice).

Now, there’s something you must know about me before we dig into these results: I would call myself a moderately outdoorsy person; I like hiking and camping, and in a past life even tested tiny backpacking stoves. But I’ll be honest—starting a fire has always intimidated me. I usually leave that part of camping to my partner while I wander around the campsite pretending to be useful. Could the Solo Stove be dummy-proof? Would we have some burnt meat on a stick that was still raw inside? Truthfully, that’s what I expected.

But it was surprisingly simple to get a fire going; I just set up the stove per instructions (which is as easy as putting the base on the ground and putting the stove on top, then placing the rim on top of that), then started a fire using some scrap wood (my father-in-law is a carpenter), a couple of torn up LaCroix boxes, and a lighter. I piled on two small-ish logs and before I knew it, I had myself a fire.

Solo claims that their fire pits are smokeless, and this was true once the fire cleared up a bit and got going. The holes on the bottom stabilizer piece and at the top helped with airflow and directed the flame upwards. (Note: the sides of the stove do get very hot, so be careful.)

The trickiest part about setting up the Solo for cooking is putting the hub and grill grate on top; I waited until the fire had calmed down a bit and the wood started to get that coal-like scaly crust because I didn’t want to 1. Singe my eyebrows and 2. Overheat the cast iron.

I used some oven mitts to protect my hands when putting the hub and grill grate on the stove, and it took some adjusting to get it centered. That said, once it was centered over the opening, it was very sturdy (likely because it’s 17 pounds).

Next, I got cooking. For my first cooking test, I started easy (and I did have a frozen pizza on hand, just in case). I cooked up a few Italian sausages, some small sweet peppers, and a few rounds of red onion brushed with olive oil. I also grilled some pre-baked Mrs. T’s pierogi towards the end, when I was a little over-excited that it wasn’t a total disaster.

One thing I learned was the cast iron grill grate got hotter on one side because of the way the wood fits in the stove, so being attentive and moving food helped ensure an evenly-cooked end result. I also learned that it’s worth investing in a good pair of log tongs and a poker; readjusting the logs or giving the coals a poke helped regulate and control the heat.

Sausages are also a very forgiving food; since they are fatty, it’s hard to overcook them. The peppers and onion were soft and nicely charred, and even my oddball grilled pierogi turned out well, with a faint smoky wood flavor.

Next, I cooked up some thinly sliced, marinated beef chuck. The small, thin pieces of beef cooked quickly, about 1 minute per side (faster than our Galbi recipe likely because I cut the meat into roughly 4-inch long, thin pieces), so again, attentiveness was key. I also used the hot grill to warm some pitas and char some steamed broccoli. Everything was delicious.

The Lodge Reversible Grill / Griddle Was Great for Making Flatbreads

I also wanted to see if you could use a different grill surface with the Solo stove, and the closest thing was a flat-top griddle/grill made by Lodge. It’s smaller than the Solo grill grate (it’s 16.75 inches long by 9 inches wide), making it a little trickier to cook on, since food could fall off the edges into the flames. It’s also thinner than the Solo grill and heated up very quickly. I used it with the Solo hub to avoid direct flame-to-cast iron contact.

I started with Kenji’s recipe for grilled naan, using the griddle side of the Lodge.

It was a bit hot right out of the gate; the first two pitas got a bit more burn on them than I would have liked, but after letting the fire die down and the cast iron cool off a little, the naan puffed up nicely and got a crisp golden crust. I tossed the last naan on the Solo grill grate to see how it would compare. The naan didn’t cook as nicely as it did on the smooth griddle surface, and it was a bit soggy. I also cooked some simply seasoned lamb loin chops on the Lodge (using the grill side), and after cooking them for a few minutes on each side, they were beautifully seared.

But when it came time to cook the corn, chicken souvlaki skewers, and eggplant, I switched back to the larger Solo grill grate—the Lodge worked well for the naan and fatty lamb, but was small and thin (it heated up VERY fast), and I wanted to have more control over the amount of heat hitting the food (especially for the chicken). So I put the Solo grill grate back on and grilled the chicken skewers for a few minutes on each side, rotating them around the grill to ensure even cooking; I did the same for the eggplant (which I tossed in an agrodolce sauce after) and corn.

The verdict: Everything was not only edible, but delicious. While I did like the Lodge grill/griddle for making the naan (the flat griddle side cooked the naan more evenly and got hotter, which helped with the quick rise needed), it was just too small and thin to cook finicky meats like chicken; I worry they would just burn.

The larger Solo grill, which had slats, was great for all manner of cooking (save for flatbreads, which sagged through the slats); the large surface area meant there were cooler spots that you could move meats or vegetables to in case they started to get a little too charred. So, if you really want to cook on a Solo stove, I would suggest investing in the cast iron grill top and hub.

The Solo Bonfire Was Also Great as a Fire Pit

Setting up the Solo stove as a fire pit was identical to setting it up for cooking, except I didn’t need to put on the hub and grill grate. Once the fire was really going, my partner and I sat around it and toasted marshmallows. The flames were directed upward by the air flowing through the holes at the bottom and the top, and it was an altogether easy and pleasant experience.

Cleaning the Stove Was Easy (if a Bit Messy)

When I finished using the stove either for cooking or as a bonfire, I extinguished the hot coals with water then let the setup cool down overnight (Solo recommends waiting between 2 to 4 hours, so I was being extra cautious). Cleaning it was dirty, and I found tipping the entire container on its side was the best way to sweep out the muddy ash. I also gave it a rinse with a hose and emptied the water afterwards to get it even cleaner before covering it with the cover that comes with it. The metal on the hub and inside the stove did discolor after multiple uses—but that was to be expected and didn’t affect usage.

It was really fun cooking over the Solo Stove Bonfire. Sure, you could just use a grill (be it charcoal or gas), but if you’re looking for something different (and want to impress your friends), live-fire is a fun cooking medium.

The stove was easy to set up, and the double-walled siding and air vents at top and bottom made starting a fire quick, easy, and sans smoke. The grill hub and grate were also great to cook on, and we didn’t have any issues with burnt or raw food. That said, if you’re looking to cook lots of flatbreads on your Solo stove, we do recommend using the Lodge grill/griddle or another flat, cast iron surface without slots. And even if you’re not looking to cook over a fire, the Solo Stove Bonfire also made for a great fire pit; it burned clean and focused the flames upward.

Overall, while live-fire cooking might seem intimidating, I can honestly say that with some thoughtful planning about what you’re going to cook (and some confidence, and some good, dry wood), you too can be a Mallmann.

Can a Solo Stove be used on a deck?

The brand does not recommend using a solo stove on a wooden surface, like a deck, since it can damage it over time. We used the Solo Stove Bonfire on a stone patio with success.

What can you burn in the Solo Stove?

Classic firewood is totally fine to burn in the Solo Stove. Just don’t over-fill it or it’ll get really hot and you’ll have more of a mess to clean at the end. You can also use charcoal briquettes, just know it might take longer for them to get to a nice heat for cooking.

How should you store the Solo Stove?

Solo Stoves come with a carrying/storing bag. We recommend storing it somewhere where it won’t be exposed to water for a prolonged period of time, though if some rain gets on it, it will be fine.

How soon after using can you clean the Solo Stove?

We recommend waiting until it’s completely cool before cleaning it; this can take anywhere between two to four hours. It’s also okay to let it cool overnight, if you have a late-night fire.