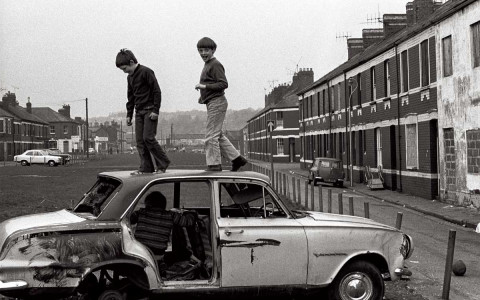 Brittle With Relics takes its title from the irascible Welsh poet R.S. Thomas and closes with the actor and activist Michael Sheen drawing on lines from Dylan Thomas. This is testament to the degree to which ideas about Wales and Welsh identity find their roots in the country’s art and culture, but also the extent to which that art and culture contains as much critique and self-deprecation of ‘Welshness’ as it does celebration.

Richard King’s book can be described as an oral history, with thematic chapters providing brief historical context before being handed over to discussion by a variety of voices from politics, academia and culture. Well-known figures, from the former leader of the Labour party Neil Kinnock to rock musician Nicky Wire, speak alongside veterans of the miners’ strike and witnesses of the Aberfan disaster. This format, emphasising a diversity of viewpoints, feels appropriate for a nation where history can often seem like a collective effort.

The study of 1962-97 connects two historical threads: the struggle to sustain an identity based on Welsh language and culture – one which accelerated and achieved success throughout these decades – and the loss, over the same period, of a sameness based on industrial employment.

Despite the latter identity’s centre in the south-eastern coalfield, where language preservation was often regarded politically as a marginal concern, and the former’s base in the country’s west and north, it is too crude to see these strands as geographically determined. King highlights the liminal status of places like Newport and the extent to which internal migration – almost always in response to shifting employment patterns – had an impact on the use of and access to Welsh. Many contributors recall their grandparents’ or parents’ origins in a different part of Wales from their own and the familiar story of grandparents who spoke Welsh as their first language before it faded from use.

The book begins with a meditation on the language: Saunders Lewis’ incendiary radio broadcast in 1962, predicting the extinction of Welsh unless ‘revolutionary methods’ were used in its defence, galvanised direct action and civil disobedience, spurred on not only by still relevant issues such as English-owned holiday homes pricing out locals, but also the establishment of military training bases in Wales and ‘blatant colonialist action’ like the 1965 flooding of the village of Capel Celyn to provide water for industry over the border.

Nationalist tendencies were often intertwined with anti-militarism or environmentalism, which were generated in turn by the occupation of land and space in rural Wales. The activism of the 1960s was also strongly linked with culture, through the establishment of Welsh publishing houses, drama groups and Welsh-language folk and punk music. As an early contributor suggests, for an ‘insecure’ country, language derived importance as a relatively solid signifier of difference and identity. Other voices, however, pinpoint the ‘fine, fine line’ between nationalist sentiment and more damaging reactionary attitudes towards outsiders and incomers.

The following chapters bring other interconnected identities and battles into play: the 1980s women-led anti-nuclear campaigns and the cataclysm that was the 1984-85 miners’ strike. Despite the diversifying of Wales’ manufacturing sector from the 1960s and previous pit closures under Harold Wilson, the onslaught from the Thatcher government on what King describes as ‘the values of industrial Wales’, as well as on its economic base, was instrumental in the country’s decline. After a comprehensive chapter on the strike’s politics, logistics and impact on individuals and communities, the book traces the peculiar melancholy of the post-industrial landscape (common too, of course, to parts of northern England and Scotland), as working collieries become heritage museums and miners’ institutes fall to disuse.

In the later 1990s the long shadow of deindustrialisation seemed briefly to lift, via the narrow acceptance of a Welsh Assembly in 1997 and the international success of Welsh pop culture, particularly music. Contributions from the artists involved, including the Manic Street Preachers, Gwenno Saunders and Super Furry Animals, demonstrate how this music was shaped by the 60s confluence of Welsh-language activism and the political conflicts of the 80s. It is a more complex picture than the hype of ‘the New Welsh Cool’ allowed at the time.

The penultimate chapter returns to the status of the language, given institutional support even before devolution by the 1993 Welsh Language Act, but also frequently used as what contributors call a ‘political football’ and a dividing line separating the Welsh from the ‘not Welsh enough’. Such tensions meant that Wales’ own voice was divided, even as it tried to make itself heard outside its borders.

Brittle With Relics ends with the late-90s ‘culture of change’ of which Welsh devolution was part, but also notes the continuation of post-industrial poverty and the gulf between the Welsh government’s progressive legislation on local empowerment and its practical enactment. One could add to this the recent actively independent approach of the Senedd to the Covid-19 crisis, which saw public confidence in the devolved government double and suggests a more distinct political voice could be developed.

Cursory looks at Welsh history can gloss over the country’s internal variety, or concentrate on the great struggles of the 19th century – Chartism, the Merthyr Rising – which, as King notes, are often more romantically familiar than equally tumultuous events of more recent history. By contrast, the wide-ranging examination delivered in Brittle With Relics is nuanced, passionate and reflective, conveying a very Welsh blend of fatalism and hope.