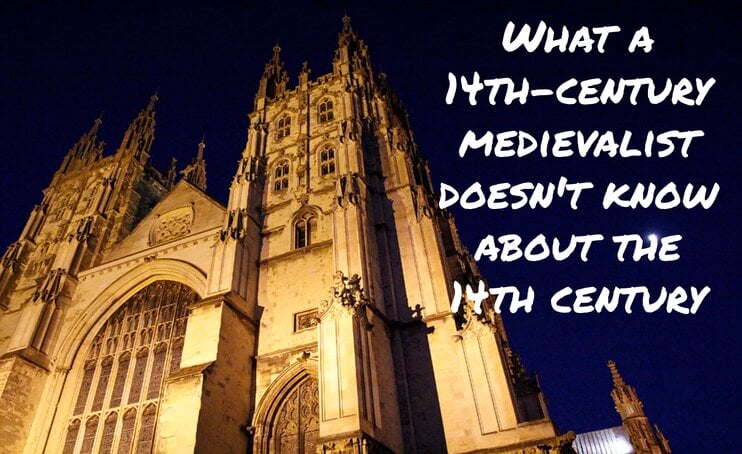 Having studied the fourteenth century for over thirty years as an art historian, when my brother, Boyd Morrison, asked me to co-author a novel with him set in 1351, I thought I was totally ready. After all, I was Senior Curator of Manuscripts at the J. Paul Getty Museum, while Boyd was a New York Times bestselling author. Plus, ever since we had been little, we had been best buds. It seemed like a dream team for such a project. The overall idea was a story about a knight errant who becomes entwined with the fortunes of a noblewoman and her evil fiancé. Then, as soon as we started writing, his detailed questions began. How did they load horses onto boats? What would a day’s labor have paid? Where did knights put their weapons on entering a monastery? What was the difference in dress between a noblewoman and her lady’s maid? Would taverns have had beds or would people sleep on rushes on the floor?

Uh-oh. I was quickly disabused of the notion that I knew the faintest useful thing about the fourteenth century. Apparently being an “expert” counted for very little when it came to details about daily life in the era. At first I felt overwhelmed and wondered if I had naively taken on too much. Maybe I’d just have to tell him to drop my involvement and set the book in 1951. Or 2051. But definitely not 1351. Then I took a deep breath and quickly realized that there were several strategies I could rely on to help make the novel a success.

The first step seemed like a no-brainer: start with what I know. My specialty is medieval art, so it will perhaps come as no surprise that the plot features a priceless medieval object at its center. One of the coolest aspects of working on the book was coming up with the description and backstory for the object. Its decoration, container, provenance, content, and meaning are all explained in detail. It was one of the first things I proposed to Boyd during our early discussions about the storyline for the book, and he loved it. He instantly saw how the book’s narrative could be structured around the chase for this object that would be desired and sought by multiple characters for different reasons.

Even more fun was intertwining the object’s backstory with real historical fact to make it believable within the context of the novel. I also had the opportunity to suggest integrating fascinating aspects of some of the famous places the characters visit, such as the tomb of Saint Thomas Becket in Canterbury Cathedral or the Papal Palace in Avignon. These glimpses of medieval artworks and architecture at the height of their glory in the fourteenth century give the story texture and help set it apart from other historical novels.

I reassured myself that I had spent over thirty years not only studying fourteenth-century medieval manuscripts, but also teaching myself how to research. I thought about all the knotty problems I had faced over the years in writing various books, articles, and conference papers. If I could track down the first appearance of a particular border motif in a group of manuscripts across multiple countries or trace the genealogical line of a fourteenth-century Parisian family, I could certainly use those same skills to find out basic facts about life in the period. I had access to major libraries, online databases, and a lifetime of knowledge about how to conduct research. Maybe I didn’t know offhand what the rules of a tournament melee were in the fourteenth century or who would issue a letter of safe conduct, but I sure knew how to find out.

I enjoyed hunting for types of information I had never needed before. Books like Ian Mortimer’s The Time Traveler’s Guide to Medieval England: A Handbook for Visitors to the Fourteenth Century (2011) and Jeffrey Forgeng’s Daily Life in Chaucer’s England (2009) provided a great starting point, while specialized knowledge of particular subjects came from scholarly works such as Elisabeth Vodola’s Excommunication in the Middle Ages (1986) and Helen Matthews’s The Legitimacy of Bastards: The Place of Illegitimate Children in Later Medieval England (2019). Although I learned far more than we would have wanted to include in the novel, all my combined knowledge did, I think, create a sense of authenticity that underpins the entire story and provided a solid basis for its major plot points.

There were numerous times during the writing process when I would come up against a roadblock because I simply could not find the answer to a particular question that was necessary for a scene. These often tended to be issues related to aspects of daily life that were so common during the period that the information was not recorded in detail. Sometimes, I could turn to manuscript illuminations to help determine what was accurate. For instance, it commonly assumed that women rode side-saddle during the medieval period, as that seems more “proper.” In the literature of the period, including secular romances, there are plenty of women riding from one place to another, but there are no specifics given about their saddles. However, numerous images provide a very clear view that women did indeed ride astride at the time. This was helpful information as we wrote.

In other cases, it proved impossible to obtain hard facts. In one scene, our characters are crossing the city walls into Canterbury, and Boyd asked me what the toll would have been. I looked and looked, and could not find any information. Eventually, we decided that it didn’t matter. Why do we need to tell the reader how much the toll was? So in the book, they simply pay the toll, and we never mention the exact amount. We realized that before investing too much time and effort, we should always be asking ourselves, what is absolutely necessary in order for the plot to progress? Can we just gloss over it and move on? Sometimes, of course, it does matter, and it lends a sense of authenticity to incorporate the specifics. But other times, it works just fine to simply move on.

Sometimes, despite all my knowledge, despite all my research, despite all endeavors to gloss over it, we still didn’t have material that suited the story. In some cases, we just had to make things up. After all, this isn’t an academic publication, it’s a novel. The point is, we consciously knew which things we were making up, and we could extrapolate with some confidence based on all the background we did have.

For example, a portion of the novel takes place in a monastery that survives to this day. We needed it to be a nunnery, so we simply changed it. Historically, that monastery was always occupied by monks, not nuns. But it was necessary for the narrative. So we made it as realistic as possible, by thinking about what circumstances could have led to it being converted to a nunnery, and what conditions would have prevailed afterwards. In this way, it was a thoughtful fabrication that was deliberately put into place.

Thankfully, this type of invention was not needed very often. But it certainly came in handy a time or two. By not reverting to making things up too often, we made the novel (including those bits) believable.

The good news is that after a lot of hard work, we did it. The Lawless Land which is now published. I’m excited to share our creation with audiences thirsty for a rousing adventure set in the Middle Ages. Throughout, I hope you will spot those aspects that we poured so much energy into getting right. There is even an afterword I contributed that discusses which particular elements of the novel are fictional and which are nonfictional. Feel free to blame me for any mistakes related to the fourteenth century, and despite my best efforts, I know all you devoted medievalists out there will find some!

For the past 25 years, Beth Morrison has been a curator in the Department of Manuscripts at the J. Paul Getty Museum. She has curated several major exhibitions, including ‘Imagining the Past in France, 1250-1500,’ and ‘Book of Beasts: The Bestiary in the Medieval World.’ She regularly studies spectacular illuminations meticulously painted on parchment, which bring to life stories of gallant knights, heroic damsels, and the common people from the Middle Ages.

To learn more about The Lawless Land, please visit the publisher’s website or buy this book on: