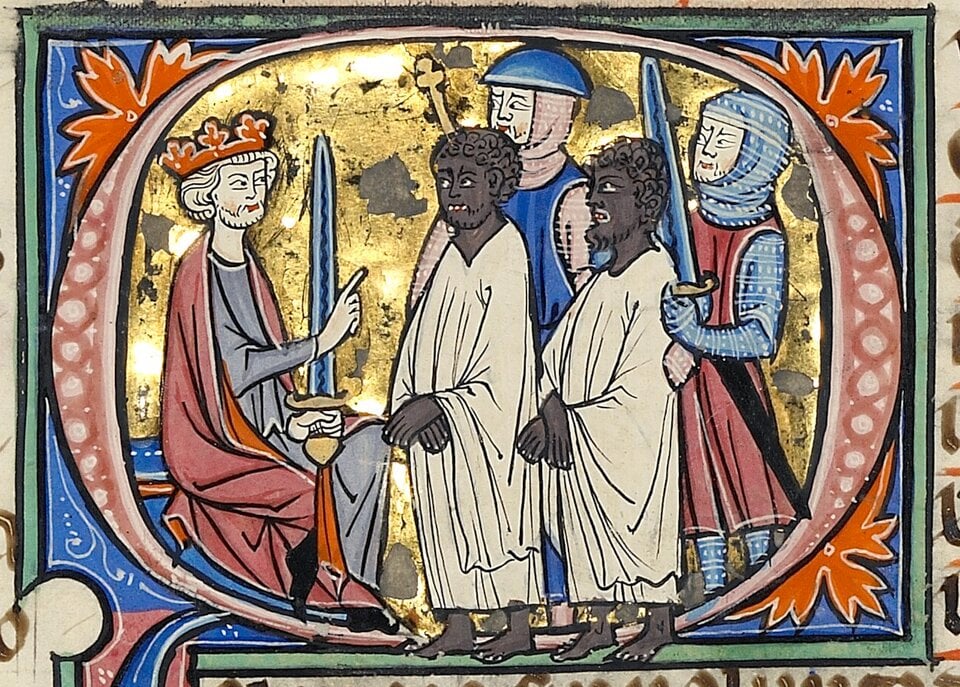 Medieval historians have been increasingly looking at issues of race and slavery. These topics come together in a new article that examines an unusual paradox – why were artists in later medieval Iberia consistently depicting enslaved people as having dark skin and coming from sub-Saharan Africa during a time when Black slaves were a small minority in this society?

The research by Pamela A. Patton has been recently published in the article “What Did Medieval Slavery Look Like? Color, Race, and Unfreedom in Later Medieval Iberia,” which appears in the July 2022 issue of Speculum. Patton, Director of the Index of Medieval Art at Princeton University, has been researching manuscripts and artworks from Iberia as well as ideas about race in medieval art.

The article notes that during the Middle Ages, slavery was common in Iberia, but the majority of enslaved people were locals caught up in the wars between the various Christian and Muslim states. It was only by the 14th century that enslaved Black Africans were being sent to Iberia, but even then they were among many foreign peoples who were part of the slave trade – Greeks, Russians, Armenians and other groups also found themselves as captives taken to Iberia.

But as this was happening, and even before this, artists from Iberia were consistently showing Black people as slaves. Patton points to numerous examples from the 13th and 14th centuries, including Christian manuscripts such as the Cantigas de Santa María, and Jewish books like the Sarajevo Haggadah, which was made in Barcelona around 1340.

In one of the examples, Patton looks at a scene depicted in a legal manuscript known as the Vidal Mayor, which was likely made for King Jaume II of Aragon around the year 1300. Patton describes the scene, which is an illumination around the letter Q:

Against a gold ground whose glittering surface evokes the work’s elite provenience, a pale-skinned, seated king holds an unsheathed sword as he points toward two dark-skinned, barefoot men wearing the simple undyed tunics of the lowest social class. The men’s hands are crossed as if bound, and behind them loom two larger, paler, mail-clad soldiers, one of them brandishing his own sword as the other presses the two captives forward. Eyeing the king warily, the latter figures stand out not only for their smaller scale, humble clothing, and deep brown color—a unique mixture of pigments that is repeated just once elsewhere in the manuscript—but also through distinctive facial and somatic features such as snail-curled hair, pale lips, whitened eyes and teeth, and minute white finger- and toenails.

This would not have been a scene that depicted a real event – Aragonese kings were not at war with sub-Saharan Africa. Yet, the artist chose to depict this image. Patton argues that what we are seeing here was not meant to have been a literal representation but rather a symbolic one. By representing these captives as Black people, they were associating them with darkness and blackness, both eliciting long-held fears for medieval (and earlier) peoples.

One of the most important visual sources for Patton is the Cantigas de Santa María, a collection of poems with musical notation that was created at the court of Alfonso X of Castile (1221–1284). Much of it is illustrated and comes with a lot of depictions of various peoples, including dark-skinned figures. They are usually depicted in a stereotypical manner and as slaves.

In one illustrated story from the Cantigas de Santa María we have a jealous mother-in-law trying to frame her daughter-in-law for adultery by commanding her slave [mouro] to get in bed with her. They are then caught and sentenced to be burned, but the Virgin Mary miraculously rescues the daughter-in-law from the flames (but not the slave). According to Patton, the illustrations as well as the wording of the story itself focus on the skin color of the enslaved man.

But the mouro’s stereotyped appearance had further implications. Evoking images of the “Ethiopian” devils thought to torment the Christian faithful, not only in monastic texts but in narratives contained within the very same manuscript, it calls up a longer visual tradition in which sinfulness and danger could be perceived as fundamentally linked to blackness—even irredeemably so, as the Virgin’s abandonment of the enslaved man would suggest. Such implications here do double duty, justifying the Virgin’s failure to rescue the mouro while mirroring Castilian anxieties about the spiritual and sexual dangers posed by the presence of household slaves.

This and other illustrated texts from the period reveal that Iberian artists began to heavily associate slavery with dark-skinned people. Patton notes a strong similarity between the various artworks she researched:

What they shared was a combination of dark skin color with distinctive physical features to convey symbolic implications—of sinfulness, foreignness, enmity, or more nuanced kinds of difference. In the northern Iberian kingdoms, these connotations became the building blocks of a new visual rhetoric that could easily accommodate questions about slavery—above all, who could be enslaved, by whom, and with what justification.

It was only by the fifteenth century that Iberian enslavement of others would begin to focus on capturing people from West Africa, to be used for work in both Europe and the New World. However, by then the cultural view among medieval Iberians had long been changed so that sub-Saharan Africans were seen as slaves.

The article “What Did Medieval Slavery Look Like? Color, Race, and Unfreedom in Later Medieval Iberia,” by Pamela A. Patton is published in Speculum: A Journal of Medieval Studies, Vol. 97:3 – click here to access the article. It is part of a special issue focusing on Iberia in the Middle Ages. Katherine L. Jansen, the editor of the journal, states “I’m very proud of this themed issue of Speculum that demonstrates so beautifully the lively state of Iberian studies and the important questions medieval scholars are currently investigating.”