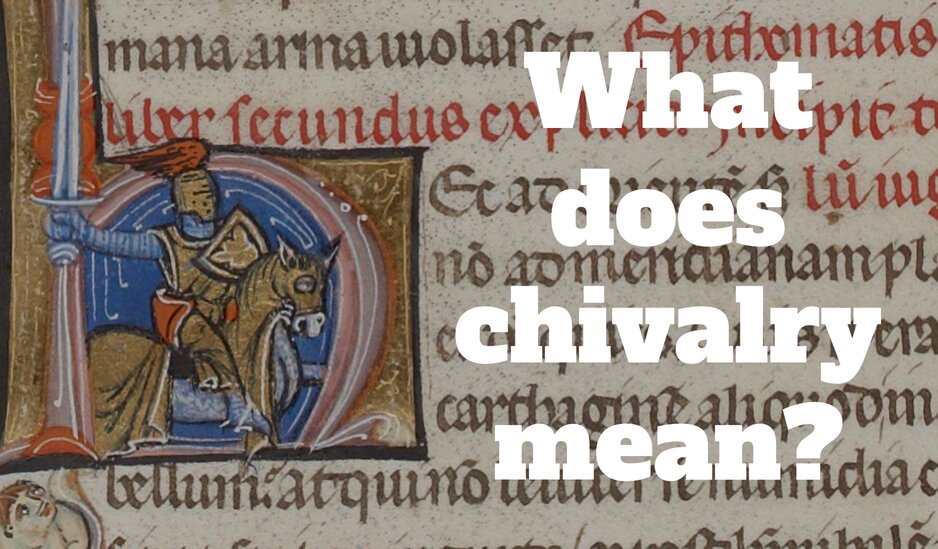 Is chivalry dead? I say no! Not because I am a champion of chivalry, but because I have heard or read an uncountable number of people praising, lamenting, or condemning chivalry. Almost everybody knows the word “chivalry,” and most know what it means – or at least they think they do.

People with no profound knowledge of the Middle Ages use the word to talk about contemporary issues. Haven’t you heard someone say, honestly or ironically, “chivalry is dead (or not dead)?” That query refers to a modern (or out-of-date) standard that should or should not govern relations between men and women, especially in a romantic context. Or, quite loosely, good manners as a standard for male behaviour. Low key or more seriously, chivalry is often part of contemporary debates. Any idea or institution that is still evoked in this way is not dead.

Many modern organizations use chivalry to guide their participants, notably military and police forces. Chivalry here means the righteous use of violence.

Many re-enactors use chivalry as a standard for their behaviour when they recreate such events as tournaments or battles. Talk to them about what they are doing on their battlefields and chivalry will almost always come up. Likewise, “the code of chivalry”:  many amateur devotees of chivalry have reconstructed the “code” based on their readings, interchanges with others, and experiences.

But of course it is not just the amateurs who debate the meaning of chivalry. Scholars interested in the subject have to define it at some point. When the subject is one that has attracted so much attention for so many years, it can’t fail to have many possible meanings. Experts on chivalry and medieval historians have to begin somewhere – with some generalization that feels right to them and serves them as a useful starting point.

What follows is an incomplete list of definitions of chivalry and related terms that have been influential in discussions of chivalry. Some of these terms closely reflect medieval usage (for example, miles, milites, which is unlikely to be used by amateurs); others are still used in everyday language (romance!) though perhaps the word has undergone a deceptive change of meaning (again, romance!). Any modern discussion of chivalry is probably rooted in one or more of these. If you aim to learn more about chivalry, this listing may help you understand the various interpretations of chivalry that you may come across. Of course, this list is not exhaustive. It would be much, much longer if I did justice to “noble,” “honour” and “prowess.”

Steven Muhlberger, before he retired from Nipissing University, studied and taught Late Antiquity, the history of democracy, Islamic history, and chivalry. His most recent scholarly works include The Chronicle of the Good Duke Louis II Bourbon published by Freelance Academy Press.