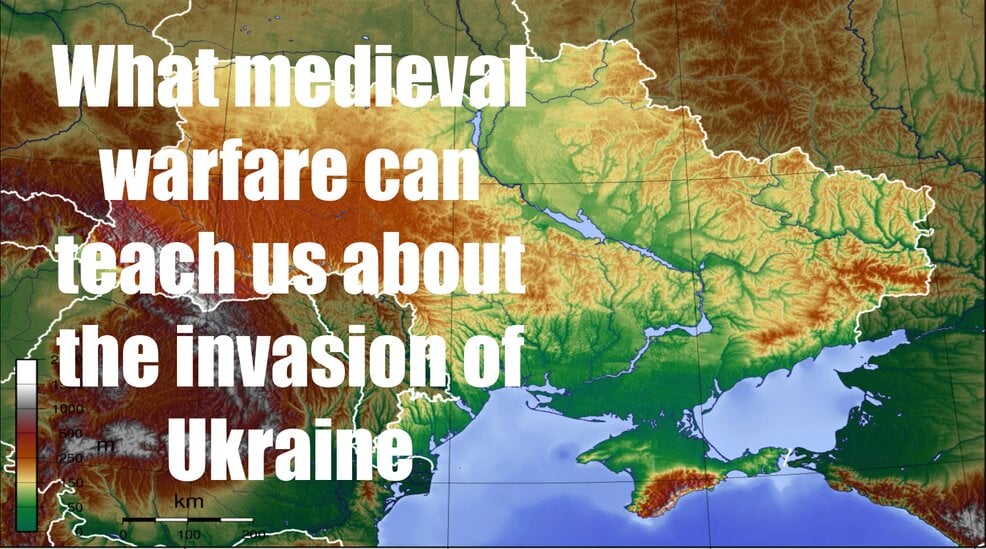 Military campaigns that took place in Ukraine and Russia during the Middle Ages offer insights into how environmental factors may place a decisive role in the current war for Ukraine.

No less an authority than Vizzini, played brilliantly by Wallace Shawn in The Princess Bride, reminded us that the most famous classic blunder was to get in a land war in Asia, but to paraphrase his conclusion, only slightly less famous is never go to war in the spring in eastern Europe. Russia’s President Vladimir Putin seems to have forgotten this fact and his army is now paying the price.

Spring, a time of leaves appearing on trees and the beginnings of new growth is also a time of mud. The frozen ground of winter is thawing, rain is common, or snow melting to rain, rivers are running higher. We see the effects of this on the vast column of Russian vehicles backed up north of Kyiv. American Defense Department officials have pointed out that the Russian convoy is confined to the twisting roads because if they leave them, they get bogged down in the mud.

The medieval history of Rus can tell us about the precedent for traveling and making war at other times of the year. Eastern Europe is renowned for its river systems which connect it to the wider world. The early history of the kingdom of Rus starts with Scandinavian traders, known in eastern Europe as Varangians, traveling through those river systems looking for slaves, furs, amber, and silver. The silver, in particular, was crucial and it, too, was transmitted by the river systems. Its origin was in the Abbasid Caliphate and it traveled north to the Khazars near the mouth of the Volga River and upriver to the Volga Bulgars whom the Abbasids had helped convert to Islam, and about whom we learn much from the story of Ibn Fadlan. Those rivers provided the ability for boats and thus people and goods, to move widely through the region, via their breadth and the many portages, transport points, between the rivers.

What is less well known is that in the winter, the rivers were equally useful. Once they were frozen, and many of the rivers did freeze in the winter, they became transport routes again, allowing travel on the ice to proceed in the same way, though by horse, foot, or sledge, rather than boat, as they did during the warmer months of the year.

In terms of practical examples of the problems of making war in eastern Europe at particular times perhaps we can start with the poorly documented early eleventh century, when Volodimir Sviatoslavich, the Christianizer of Rus, prepared to march from Kiev (Kyiv) to Novgorod to attack his own son, Iaroslav for withholding tribute. The Povest’ vremennykh let, our main Rusian source for this period, records that Volodimer “exclaimed, ‘Repair roads and build bridges’.” He knew that before any campaign could be completed, the infrastructure had to be secure. Hidden from the view of most is also a 1016 battle which took place on a frozen lake, recorded in one variant of the Povest’ vremennykh let, but not others. The lake, obviously inaccessible on foot in the summer, would provide a wide-open area for armies of medieval size (several hundred each) to meet and fight.

Turning to the better documented thirteenth century, we see multiple invasions of Rus where the invaders also understood that it was better to travel during seasons when the ground was hard, either in winter when it was frozen, or summer when it was dried out. For the latter, a good example is the Battle on the Neva between Swedish crusaders attacking Rus as schismatics and the Novgorodian ruler Alexander Iaroslavich defending. The battle took place in July 1240, and it was the one that made Alexander’s name – Nevsky. Donald Ostrowski has also questioned whether Alexander Nevsky’s most famous battle, two years later; the “Battle on the Ice” against the Livonian Sword Brothers actually took place on the ice at all.

Winter war is much more commonly discussed at this time, and the Mongols were well aware of its advantages in eastern Europe. One of the initial attacks on Rusian territory came at Riazan, a battle that took place in December 1237. The Mongols besieged the city and were able to eventually break in and slaughter everyone, at least according to the Tale of the Destruction of Riazan. The other key example in regard to the Mongols is their conquest of Kiev which took place on December 6, 1240. The date is important, given that it is St. Nicholas’s day, one of the patron saints of Rus.

In both cases, the Mongols preferred to move in the winter. The frozen rivers acted as highways for them to move their cavalry forces through Rusian territory with ease. The classic Mongol tactic, adapted from hundreds of years of steppe warfare, was to attack quickly and retreat quickly, in particular they liked to feint with an attack and draw the defenders out into a line of pursuit which could then be attacked at will along the now extended front. These tactics would be nearly impossible with thick mud, making it harder to move quickly, to gallop, to charge or retreat. Thus, their activities in winter and in high summer.

A preference for winter battles is not just a medieval phenomenon. The sixteenth-century Swedish author, Olaus Magnus included numerous references to Swedes and Muscovites fighting on the ice such as “[t]he ice is firm enough to bear squadrons of cavalry or infantry, whether disposed in open or close order” and “extremely bitter contests have often been waged between the Ruthenians (otherwise known as Russians or Muscovites) and the Swedes or Finns… on flat ice and in thick depths of snow.” To be sure, Olaus Magnus also tells us that, “as the season verges on the beginning of April, no one trusts the thickness, still less the strength, of the ice, unless he walks on it at dawn; the ice becomes so brittle during the day under the eye of the sun that, where a short time before it supported armoured riders, it can now hardly bear one unarmed man.”

Olaus Magnus was writing during the Little Ice Age when the world cooled significantly. This period ended in the middle of the nineteenth century and the world has only gotten warmer since, especially in the twentieth and twenty-first centuries. Thus, though March is not April, it can well be compared given the temperature differential between his time and ours.

Given that Vladimir Putin has used history to attempt to define and justify his war in Ukraine, he has still managed to fall victim to another of the classic blunders, those who don’t learn history are doomed to repeat it. It seems he has.

Donald Ostrowski, “Alexsander Nevskii’s “Battle on the Ice:” The Creation of a Legend,” in Festschrift in Honor of Norman W. Ingham in Russian History/Histoire Russe 33:2–4 (2006).