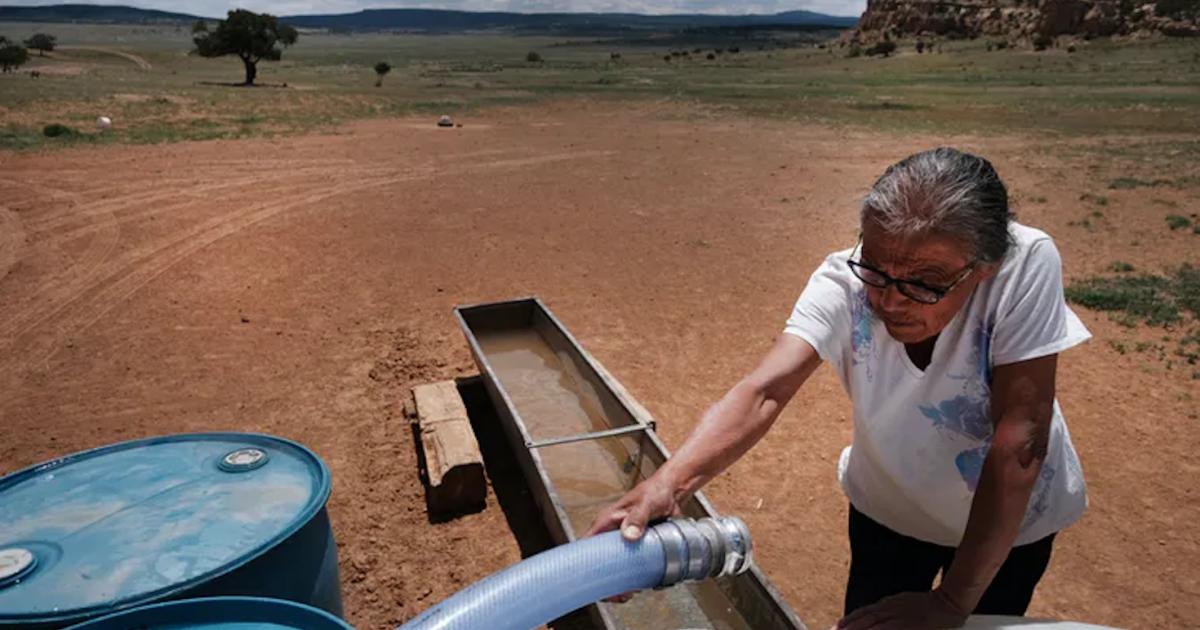 The 2021 water year ended Sept. 30, and it was another hot, dry year in the western U.S., with almost the entire region in drought. Reservoirs vital for farms, communities and hydropower have fallen to dangerous lows.

The biggest blow came in August, when the U.S. government issued its first water shortage declaration for the Colorado River, triggering water use restrictions.

In response, farmers and cities across the Southwest are finding new, often unsustainable ways to meet their future water needs. Las Vegas opened a lower-elevation tunnel to Lake Mead, a Colorado River reservoir where water levels reached unprecedented lows at 35 percent of capacity. Farmers are ratcheting up groundwater pumping. Officials in Arizona, which will lose nearly one-fifth of its river water allotment under the new restrictions, even floated the idea of piping water hundreds of miles from the Mississippi River.

These strategies conceal a more fundamental problem: the unchecked growth of water consumption. The Southwest is in an “anthropogenic drought” created by the combination of natural water variability, climate change and human activities that continuously widen the water supply-demand gap.

In the long run, this can lead to “water bankruptcy,” meaning water demand invariably exceeds the supply. Trying to manage this by cranking up water supply is destined to fail. 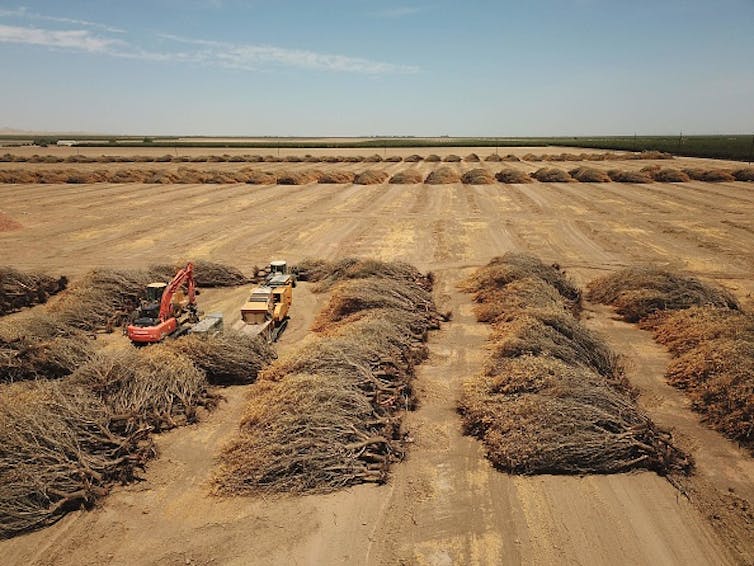 A California farmer tore out dead almond trees in July because of a lack of water to irrigate them. Image courtesy of Getty Images via Robyn Beck

More than 7,000 miles away, Iran is grappling with water problems that are similar to the U.S. Southwest’s but more severe. One of the driest years in the past five decades, on the back of several decades of mismanaged water resources, brought warnings of water conflicts between Iranian provinces this year.

As environmental engineers and scientists — one of us is also a former deputy head of Iran’s Department of Environment — we’ve closely studied the water challenges in both drought-prone regions. We believe past mistakes in the U.S. and Iran offer important lessons for future plans in the U.S. Southwest and other regions increasingly experiencing drought and water shortages.

As the supply of water from the Colorado River diminishes, Southwest farmers are putting more straws into already declining groundwater that accumulated over thousands to millions of years. But that is a short-term, unsustainable solution that has been tried across the U.S. and around the globe — with major consequences. The High Plains Aquifer and California’s Central Valley are just two examples.

Iran offers a case study in what can go wrong with that approach, as our research shows. The country nearly doubled its groundwater extraction points between 2002 and 2015 in an attempt to support a growing agricultural industry, which drained aquifers to depletion. As its water tables drastically declined, the groundwater’s salinity increased in aquifers to levels that may no longer be readily suitable for agriculture.

While there is no easy solution, a number of actions are possible.

As water-filled pores in the soil are drained, the weight of the overlying ground compresses them, causing the aquifers to lose their water holding capacity and accelerating land subsidence. Iran’s capital, Tehran, with more than 13 million residents, subsided more than 12 feet between 2003 and 2017. Similarly, some areas of California are sinking at a rate of up to 1 foot each year.

Another proposal in the Southwest has been to pipe in water from elsewhere. In May, the Arizona legislature urged Congress to initiate a feasibility study to bring Mississippi River water to replenish the Colorado River. But that, too, has been tried.

In Iran, multiple interbasin water transfer projects doubled the flow of the Zayandeh Rud, a river in the arid central part of the country. The inflow of water supported unsustainable growth, creating demand without enough water to support it. In dry years now, no one has enough water. Many people in Khuzestan — the region supplying water to central Iran — lost their livelihood as their farms dried out, wetlands vanished and livestock died of thirst. People in central Iran also lost crops to the drought as incoming water was cut. Both regions saw protests turn violent this year. 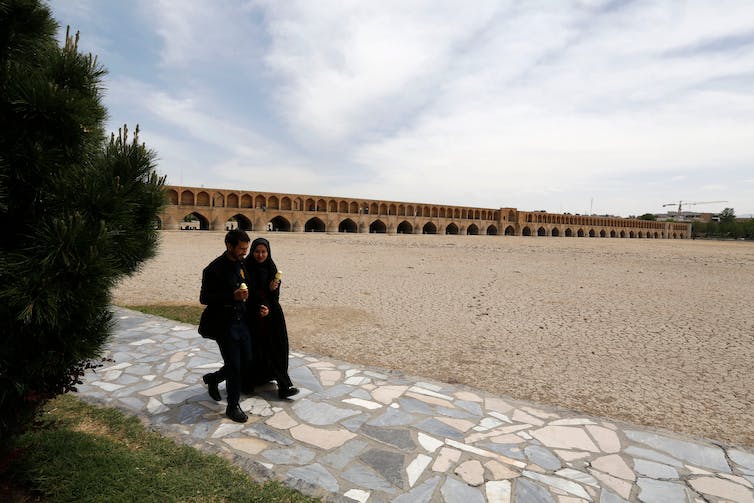 Iranians walk near a bridge built in 1602 over the Zayandeh Rud in Isfahan. Image courtesy of Getty Images via Atta Kenare/AFP.

Another project, the California Aqueduct, was constructed in the 1960s to transfer water from the Sacramento-San Joaquin Delta in Northern California to the Central Valley and southern parts of the state to support agriculture and some urban demand. This also did not close the water demand-supply gap, and it pushed economically and culturally important native fish species and ecological systems in the delta to the point of collapse.

Looking ahead in light of looming water bankruptcy

As the continued influx of population into the U.S. Southwest raises water demand in the face of shrinking water supply, we have to wonder whether the Southwest is heading toward water bankruptcy.

While there is no easy solution, a number of actions are possible.

There is great potential for water savings through efficient irrigation and precision agriculture systems, which could keep agriculture viable in the region.

Cities can save water by curbing outdoor water losses and excess water use, such as on ornamental lawns. Californians successfully reduced its water demand by more than 20 percent between 2015 and 2017 in response to severe drought conditions. Replanting urban landscapes with native drought-tolerant vegetation can help conserve water.

On the supply side, communities can consider nontraditional water sources, water recycling and reuse in all sectors of the economy, and routing runoff and floodwaters to recharge groundwater aquifers.

Emerging technological solutions could boost water resources in some regions, including fog water collection, which uses sheets of mesh to capture moisture from fog, and desalination plants that turn seawater and saline groundwater into drinking water. One new desalination plant planned for Huntington Beach, California, is awaiting final approval. Environmental consequences of these measures, however, should be carefully considered.

The Southwest monsoon returned this summer after a record dry previous year and a half in the region, but it wasn’t enough to end the drought there. Forecasts suggest a high chance that a La Niña pattern will develop over the winter, meaning the Southwest is likely in for another drier-than-normal start to 2022.

Iran is already in water bankruptcy, with demand exceeding supply. It will take a lot more than a wet year to alleviate its water shortages.