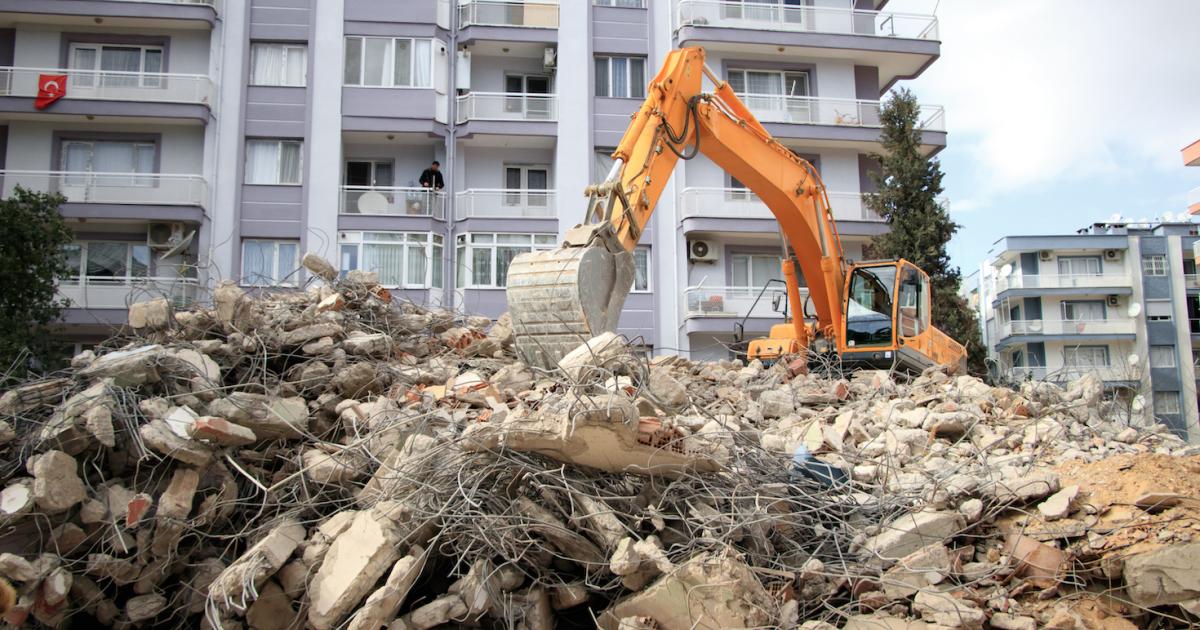 We spend over 90 percent of our time indoors. Most of you are probably reading this newsletter indoors. Have you ever spent time thinking about circularity in the built environment? The question I’m thinking about today is: Can buildings be truly circular?

We are a long way from that ideal future right now, so I took a look at some of the numbers for construction and demolition (C&D) and building waste, and suggest a couple strategies to move this sector towards circularity.

Let’s start with a couple of staggering numbers:

If these numbers aren’t bad enough, global material use is expected to more than double by 2060, with a third of this rise attributable to the building and construction sector. We also anticipate adding more than 2 trillion square feet of floor space, roughly the equivalent of adding an entire New York City to the world — every month for 40 years. This is a bit of an apples-to-oranges piece of information, but we also know that nearly 40 percent of all global greenhouse gas emissions come from the construction and operation of buildings.

I have trouble wrapping my head around the scale of that development, but we can all probably agree that it is a lot of new buildings and a lot of raw material extraction.

As much as 30% of all construction materials delivered to building sites leaves as waste.

The key question then is, what can we do to improve our situation? There are countless approaches that should all be considered together for circular building design, but I’ll start by addressing just two.

Let’s start with what to do about construction waste. If as much as 30 percent of all material delivered to a job site is disposed of before it even makes its way into the building, it would seem we have a fundamental design problem to address. It can be useful here to think of how manufacturers in all sectors have worked to minimize their waste since the beginning of the industrial revolution, if not since the beginning of humans living in communities. Standardizing processes, planning ahead and automation have all led to significant efficiency gains in nearly every sector’s manufacturing.

There are effective methods to minimize on-site C&D waste. The first, and I would argue one of the most powerful, is to use modular building systems. Manufacturing building systems in a controlled environment and limiting work at the job site to sequencing and assembly has proven effective, but is regrettably still underused.

Home builders have been doing this for a century, if not more. An early example includes the Sears mail order homes of the early 20th century. The homes would arrive with many components pre-cut to size and ready to be assembled. Sears sold more than 70,000 mail order homes between 1908 and 1940.

There are, of course, trade-offs with this method. The waste in this case is pushed upstream to the manufacturer. That being said, efficiencies are often available in manufacturing plants that are not available in the field. This is especially true in the 21st century, where computer programs can optimize each part of the manufacturing process to minimize waste. Both volumetric (whole rooms arriving on site) and panelized (wall and floor systems) modular construction can save materials and lead to more energy-efficient buildings. They can also cut construction times considerably. An additional benefit to modularity is that many buildings can be disassembled and reassembled as needed, thus serving as more of a materials bank than a fixed asset.

As a quick aside, I grew up in a modular home. A few years after my parents sold it, the new owners decided to build a new home. Someone bought our old modular home, separated it down the middle (much as it had been originally delivered in the early 1970s) and moved it to their own land on a new foundation. A good reuse story for sure, and one that almost certainly would not have happened with a standard, site-built home.

Designing buildings for circularity from the beginning is also important. Starting with circularity in mind requires close collaboration between product manufacturers, specifiers and the owners and developers of buildings. We are watching these collaborations begin to take shape through programs such as mindful MATERIALS (yes, that’s how they capitalize their name). Mindful MATERIALS is a collaboration hub that is building a common materials framework to enable better decisions by specifiers. It also supports several building products transparency programs (such as environmental product declarations and ingredient disclosures) that are key to knowing what is in a building at the time it is deconstructed or renovated.

Ultimately, interventions exist to make buildings more circular if we invest in them and put them at the forefront of design. As with any complex system of complex systems, this will take time and commitment by everyone up and down the supply chain. It also will take education to make sure that buyers recognize the value in high-quality, durable and more circular products.

We are starting to see the makings of a circular building sector unfold in front of us, but everyone involved in the sector —pretty much all of us in one way or another — needs to push it forward.