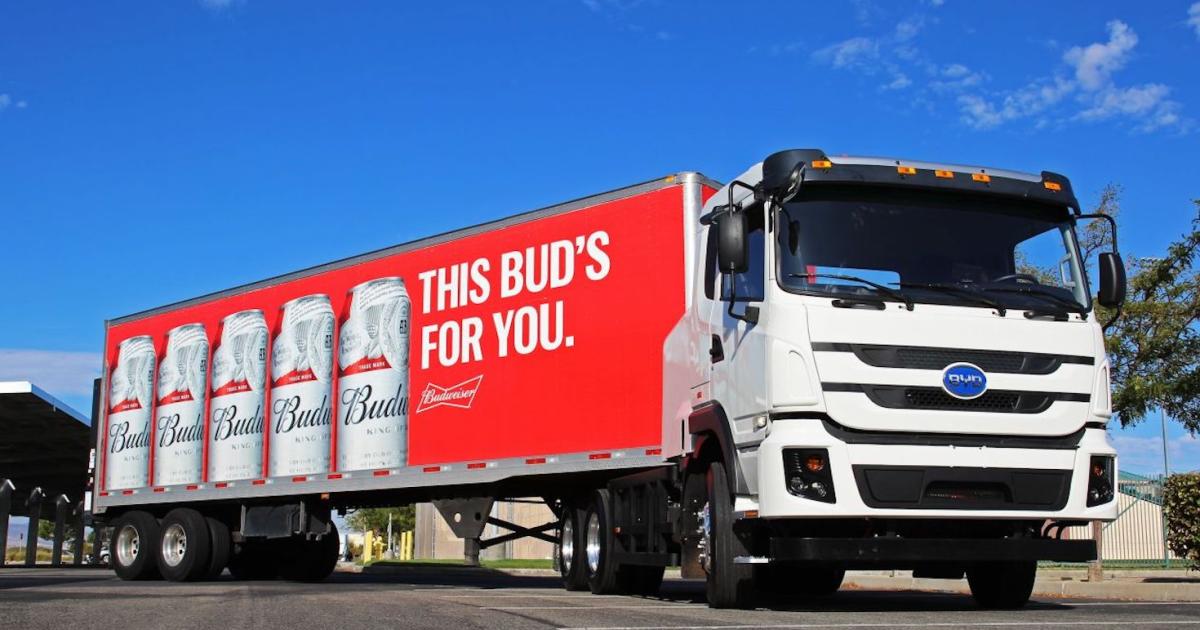 The world’s largest brewer is doubling down on climate-friendly transportation systems by collaborating with its clean-energy partners and prioritizing sustainable logistics.

Anheuser-Busch InBev has made much progress since it first announced its 2025 sustainability goals in 2018. The brewer was just getting started when GreenBiz last checked in 2019, but it has gained momentum through strategic partnerships and building out an electrified fleet.

“In the U.S., we have over 800 trucks delivering our product every day,” John Rogers, chief sustainability and procurement officer at Anheuser-Busch, told GreenBiz. “It’s a significant footprint for one of the world’s largest logistic companies. We’re focused on route optimization, being hyper-efficient on mileage and being a leader and pioneer in alternative fuels.”

Out of those 800 vehicles, upwards of 15 percent use renewable or semi-renewable energy, according to Rogers. Anheuser-Busch, he added, has reduced its emissions from logistics operations by 19 percent since 2017, with over 200 zero-emissions vehicles operating within its fleet.

One piece of policy that Rogers wants to see is a raise in maximum-weight limits for truck containers, which would allow the company to put fewer trucks on the road while delivering the same amount of beverages.

“Sustainable logistics has played a key role in our strategy to reduce carbon emissions by 2025, as well as to achieve our more recent 2040 net-zero ambitions we announced last year,” Rogers said.

By 2025, Anheuser-Busch is aiming for a 25 percent reduction of its carbon footprint based across its entire value chain. With only three more years to meet those goals, the beverage giant is exploring new ways to capitalize on existing partnerships with transportation companies such as Nikola, BYD and Hyliion, and to leverage the tools of those companies to determine what comes next.

“In some cases, this means expanding our partnerships where the technology is proven and working within our fleet, like adding 20 additional BYD trucks into our California fleet,” Rogers said. “While other partnerships, like with Nikola and Hyliion, are more about refining the partnership and technological solutions available and working with our partners to build the network to support the implementation of these trucks.”

The company actually owns very little of its vehicle fleet, Rogers noted, as the company works with an ecosystem of partners, with each partner providing unique insights and receiving varying degrees of support from the larger company.

Meanwhile, Anheuser-Busch participates with Hyliion’s Hypertruck Innovation Council to actively support the development of Hyliion’s clean-energy vehicles. This partnership, Rogers explained, allows the company to benefit from new ideas while granting those technologies a larger platform.

“We can use our scale to bring these solutions to market more quickly so they can continue to learn and evolve the technology to meet the needs of large shippers in the industry,” Rogers said.

During the 2022 Super Bowl, Anheuser-Busch leaned on both Nikola and BYD for zero-emission deliveries in Los Angeles, where this year’s game was played.

The brewer’s deployment of 20 additional BYD trucks in California is part of its bid to push cleaner and quieter technology out onto roads. In 2019, the company had deployed 21 BYD battery-electric trucks in California, which, at the time, marked the largest Class 8 electric-truck deployment in North America.

“By working with these partners from the beginning, we can support the development of transportation solutions that meet the complex needs of today’s fleets,” he added.

For its 350 million delivery miles each year, Anheuser-Busch remains intent on being as efficient as possible. It does this in part through teaming up with companies that contribute to building the hydrogen- or electric-vehicle infrastructure, Rogers said, and Anheuser-Busch can use its size and reach to amplify those of smaller brands.

The latest report from the Intergovernmental Panel on Climate Change has sparked worldwide urgency, as it detailed how certain climate impacts are more pervasive than previously estimated. But, if anything, the threat of catastrophe has only motivated Anheuser-Busch to become even more prominent of a clean-energy leader.

The beer maker is fresh off a Gold Medal for International Corporate Achievement in Sustainable Development, which is awarded each year to a global business that has made sustainability an integral part of its operations.

“We make a big footprint every day, but the sustainability of our fleet is really a big contribution to our net-zero ambitions,” Rogers said.

Other 2025 sustainability goals the beverage retailer has set forth include:

One piece of policy that Rogers wants to see is a raise in maximum-weight limits for truck containers, which would allow the company to put fewer trucks on the road while delivering the same amount of beverages.

“Compared to other developed markets in Europe and elsewhere, the U.S. is way behind in terms of weight limits [for trucks],” Rogers said. “We feel there’s a very, very safe and meaningful way to raise those limits, which would minimize our impact on national infrastructure and drive decarbonization efforts.”

Currently, Anheuser-Busch transports roughly 650,000 shipments of beer each year — 12,500 per week — using its own trucks. That makes up about 60 percent of its total product, according to the company, while its contracted carriers transport the other 40 percent.

Anheuser-Busch transports roughly 650,000 shipments of beer each year — 12,500 per week — using its own trucks. That’s about 60% of its total product. It uses contracted carriers for the rest.

Rogers pointed out that hydrogen-electric and battery-electric vehicles have technology that is often heavier than diesel trucks, which then reduces the amount of total weight trucks can carry.

“The cost of clean trucks is expected to come down in the next decade,” Nair told GreenBiz. “The intersection of technology and supply factors make it more likely to make green transportation an integral part of new supply chain management thinking.”

To that point, Rogers is proud of the progress he’s witnessed so far — and expects the world’s largest brewer to take the helm long into the future.

“We believe we’re a leader, that we have a unique position to really drive innovation and impact in sustainability,” Rogers said. “We think these investments make sense for building a company to last for the next 100-plus years.”