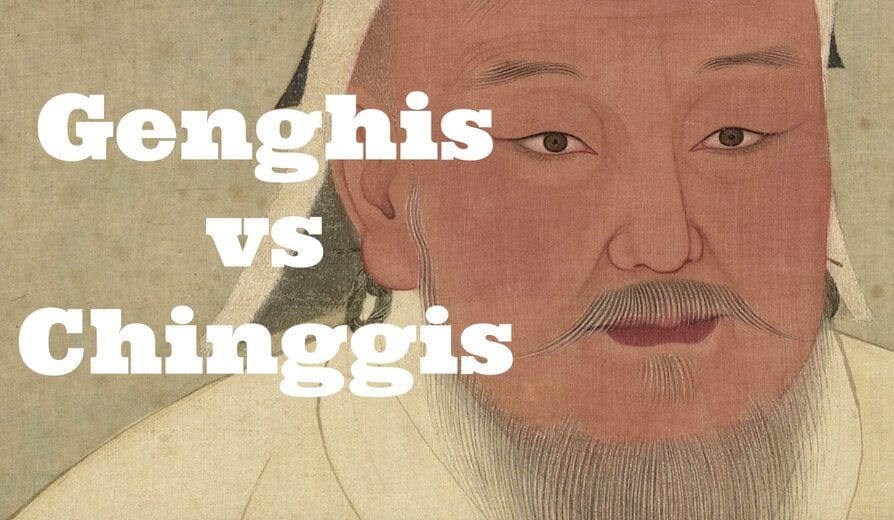 The very name “Genghis Khan” is one that immediately brings to mind images of a great conqueror. But just as with most aspects of his life, the story of his name is not so simply told. Here, we’re going to have a look at the meaning, and transmission, of the name of Genghis; or as it’s rendered in Mongolian, Chinggis Khan.

As you may have gathered, Genghis as it’s most commonly said in English sounds a far cry from Chinggis; that’s because instead of “gayn-ghis,” it should be pronounced something like Jinggis. Indeed, most European languages do this properly; in German, the name is rendered as Dschinghis Khan. It also was the name of a popular Eurovision band (and their eponymous single) from the late 1970s. Additionally, khan in Mongolian is pronounced more han. Genghis Khan should, then, if one was to stress authenticity, be pronounced as Chinggis Han. As Persian and Arabic sources render the name closer to Jinghis, when these were made accessible in the nineteenth and twentieth centuries it seems the initial consonant was misunderstood by the public at large. As the Mongols and Chinggis Khan had little bearing in popular culture or memory of the anglophone world, and there was even less access to Mongolian speakers to correct them, Genghis has stuck and become the dominant form in popular media. This was not always the case those; in the fourteenth century the great English poet Geoffrey Chaucer, in his “Squire’s Tale,” of the famed Canterbury Tales, mentions Cambuskan, the Great King of Tatary. It’s a fair enough rendering of how Chinggis Khan must have sounded to a medieval Englishman’s ears.

But that’s merely the pronunciation; what of meaning and its use? Well, Chinggis was not the birth name of the conqueror. It was a title he took in 1206, with the establishment of the Mongol Empire. His birth name was Temüjin, son of Yesügei Ba’atar, a member of the Kiyat Borjigin lineage. Shortly before Temüjin’s birth, Yesügei had fought a series of battles with a rival power, the Tatars. The leader of this Tatar lineage that Yesügei fought with was a fellow named Temüjin Ögä. Yesügei defeated him, and in most accounts took the Tatar leader captive. The victorious Yesügei returned laden with booty and captives in time for his own son’s birth (c.1162). And what better name to give his newborn son, than that of his defeated enemy? Thus was the future world-conqueror named Temüjin. It was a common custom among the Mongols to name children after defeated enemies and peoples, and impart on them some of their power, while also symbolizing their victory (see for instance Kitai, “North China/Khitans/Jin”, Quremsa, “Khwarezm,” Orus, “Rus’”).

Alternatively, the Mongols also had a well-attested custom wherein the newborn child would be named after the first thing the mother saw after giving birth. The late Professor Igor de Rachewiltz suggested that the captive Tatar leader was brought to the ger of Yesügei’s wife, Öe’lün (Hoelun) for this purpose, and summarily executed as a sacrifice for the newborn child. It’s perhaps not surprising then, that the Mongols’ own Secret History of the Mongols described Temüjin being born clutching a blood clot in his fist the size of a knucklebone (SHM §59). Fittingly, Chinggis Khan entered the world with bloodshed.

Temüjin can be literally translated as “man of iron.” Temür in Mongolian and Turkic languages means iron, and was incredibly popular in the thirteenth and fourteenth centuries. Most famously Emir Temür (Tamerlane, d.1405) but also Temüjin’s siblings bore names derived from it, his youngest brother Temüge and only sister, Temülün. The name Temüjin can mean “ironsmith,” that is, a blacksmith, a position of prestige among Mongol and Turkic nomadic peoples. A blacksmith was hardly a ‘peasant occupation,’ as we might imagine a monarch from sedentary cultures may view it. The ancestors of the Göktürk Khaganate’s ruling lineage were supposed to have been blacksmiths. In the steppes, a blacksmith was a man of immense importance and use given the limited access to forging capabilities and resources. It was not uncommon for them to be compared to shamans, or have shamanic qualities. Even after he took the title of Chinggis Khan, his birth name evidently remained well-known even decades after his death. Both European and east-Asian authors interpreted it literally. For example, a Franciscan friar who traveled through the Mongol Empire in the 1250s, William of Rubruck, and the Byzantine historian Pachymeres (d.1310) both wrote that Chinggis’ pre-conquest career had been as a blacksmith, while a rare and precious Tangut-language ritual poem dating from the early fourteenth century renders Chinggis’ name as the “Blacksmith-thunder,” an “evil person from the underworld.” We might wonder if the Mongols themselves spread this tale, believing it showed greater honour to their by-then legendary founder.

Temüjin, of course, did not remain with his birth name. When he completed his unification of Mongolia in 1206, he took his new title of Chinggis. The Secret History of the Mongols suggests Temüjin took this new title around 1184, when he became khan of the Borjigin lineage (SHM §123). However, this is almost certainly an anachronism. Most sources from the Mongol imperial viewpoint (Rashīd al-Dīn, Veritable Record/Authentic Chronicle of Chinggis Khan, the Shengwu Qinzheng lu, and Yuan shi) support that Temüjin’s new name being granted in the quriltai of 1206. The Secret History of the Mongols, despite being the earliest surviving piece of Mongolian imperial historiography (thought now to be composed around 1252 in the reign of Möngke Khaan), is often hazy with chronology and dating, and simply appears to have conflated two distinct coronations: 1) Temüjin’s enthronement as Khan of the Borjigin line c. 1184, when he first took the title of khan, and 2) Temüjin’s enthronement as Khan of the Mongol ulus, when he took the more grandiose title of Chinggis Khan.

So, Temüjin took a new title in 1206, even if, as is sometimes suggested, he had been using Chinggis informally for a few years already. If that was the case, 1206 saw the official declaration of his new name (Chinggis) as well as the Mongol Empire. But why Chinggis? In the account of the Ilkhanate’s vizier and great historian, Rashīd al-Dīn (d.1318), Temüjin’s new title is granted upon him by the powerful shaman and Temüjin’s brother-in-law, Teb Tenggeri (Teb Tenggeri itself a title, with his birth name being Kököchü). The new name was in effect, a ‘rebirth,’ signaling a new epoch, not perhaps dissimilar to how pre-Ming Chinese emperors took new ‘era names’ every few years. Grandiose titles were hardly unique in Mongol politics of the period. Temüjin’s rival, his former-ally Jamuqa, in 1201 took the title of gür-khan, meaning “universal ruler.”

With the establishment of a new state in 1206, it was necessary too to take a new title. In this case, what then does Chinggis Khan mean? This has been a matter of strong debate. Most medieval sources do not offer an explanation. It seems part of the intention in 1206 was for an entirely new title for Temüjin, not one that had been born by rivals like Jamuqa, even if only in meaning.  One of the few sources which do offer an explanation, Rashīd al-Dīn, wrote that it came from the Mongolian word ching,  meaning “strong,” or “hard.” Igor de Rachewiltz supported this reasoning, and argued persuasively in a convincing article that chinggis was a term of Turkic origin, meaning “fierce, hard, tough.” This is more or less the translation most of the modern scholarship (including the present author) follows; that Chinggis Khan means “the Fierce Ruler.” An apt description, given his career.

This is far from the only explanation put forward over the previous century. Perhaps the other most popular explanations proposed are that chinggis came from  Mongolian chino, “wolf,” (also one of Chinggis’ ancestors in the Secret History of the Mongols,) or derived originally from Turkic tengiz (in modern Turkish, deniz, meaning sea or ocean) and thus “Oceanic Khan,” or even “universal ruler.” This idea is not entirely without merit; the “oceanic” appellation was given to another important figure a few centuries later: from Mongolian dalai, “ocean,” was granted to the first Dalai Lama by a descendant of Chinggis, Altan Khan, in the fifteenth century.  Yet we do see the Mongolian form of this in the thirteenth century; dalai-yin qa’an (“ruler of the oceans,”) appears in reference to several of Chinggis’ successors, and on the personal seal of Chinggis’ grandson Güyük (r.1246-1248). The ‘oceanic/universal’ meaning of Chinggis as a derivative of tengiz has also been discarded on linguistic grounds, generally arguing that the proposed tengiz could not have taken the form of Chinggis based on our understanding of the morphology of Turkic terms adopted into Middle Mongolian.

A final remark can be given to the rank of khan. A perusal of modern Mongolian depictions of Chinggis will often see his title rendered as khaan. These are actually two distinct titles, pronounced very similarly; khaan is essentially a contraction of khan of khans. So while khan can be equivalent to king, khaan could be more akin to emperor, or king of kings. This can be more apparent in other transliterations (such as hahan, khakhan, khagan or qa’an). This is a posthumous title given to Chinggis to increase his rank; the available medieval evidence demonstrates that qa’an was first used by the Mongols only during the reign of Ögedai (r.1229-1241), Chinggis’ son and successor. Qa’an itself predates the Mongol Empire, being for example the title of the rulers of the Great Türk Khaganates. Ögedai revived its usage, necessary to distinguish his superior rank to his surviving brother, who all bore the title of khan. It was not necessary for their father to have done so, as he bore the superior title of Chinggis Khan. During and after his life, Ögedai to many medieval writers (particularly Persians such as Juvaini and Rashīd al-Dīn) was simply known as Qa’an, not dissimilar to how Queen Elizabeth II is today simply “the Queen,” (and likely will remain so long after her death). While the other top princes of the Mongol Empire could be khan, only the supreme emperor could be the qa’an.

Chinggis, as far as is known, did not bear the title of khaan/qa’an, and only after his death was he given it. In similar fashion, Chinggis’ father Yesügei also saw his rank in these later imperial sources rise from ba’atar to khan, and sometimes even to qa’an; hardly an unusual move for any dynasty wishing to bestow greater honour upon its ancestors. The aforementioned anachronism where Secret History of the Mongols gives Temüjin the title of Chinggis circa 1184 can be imagined in similar vein as well.

Jack Wilson recently completed his MA thesis at Central European University, where he offered a reassessment of the life and career of Nogai and his role in the late thirteenth century Golden Horde. You can visit the educational videos he creates about the Mongol Empire on Youtube at The Jackmeister: Mongol History.