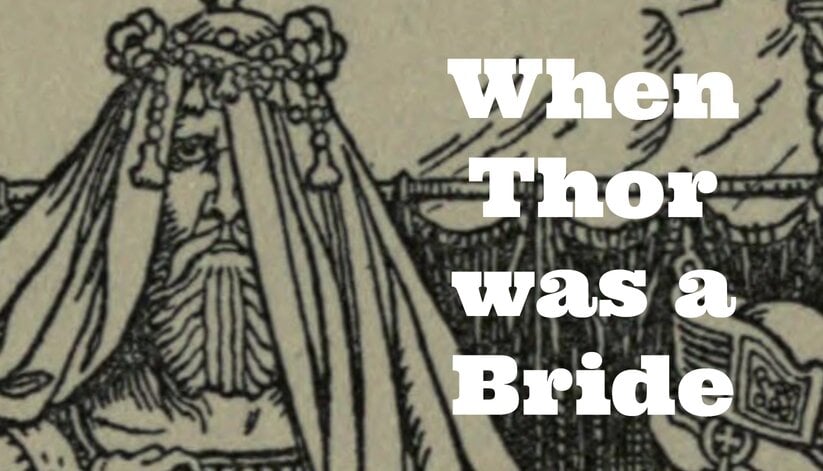 Perhaps this would make for a good script in the next Thor movie – it’s gender-bending hijinks involving Thor, Loki and the other Norse gods.

The new Marvel movie Thor: Love and Thunder has people talking about the plotline where Jane Foster gets the power of Thor. However, the medieval tales of the Norse gods sometimes have their own gender-bending, which is illustrated in Þrymlur. Written around the year 1400 and preserved in a sixteenth-century Icelandic manuscript, Þrymlur is a short poem of ninety-seven stanzas. Nearly all of it has survived, except for a few lines at the beginning.

The story begins with the anonymous poet praising the Norse gods. Heimdall, it is explained,  “could hear everything that sounded louder than hair growing on sheep,” while Loki “is said to be full of cunning.” It is Thor who gets several lines boasting of his greatness, as does his hammer Mjollnir.

Once this is done, the poem returns to the story – Mjollnir has been stolen during the night! Thor and the others gods look for it, but cannot find the hammer anywhere. Freyja even gives Thor the power of ‘feather-form’ so he could fly around searching for it. However, it is Loki who eventually discovers what has happened.

After flying out of Agard, Loki goes to Jotunheimar, the land of giants, where he meets with Þrymr. This giant reveals that he was the one who stole Mjollnir:

By magic I have hidden his hammer; it will never be found, unless you bring me Freyja, who is fairer than every woman; then the hammer will be found here – and so help your life.

The news is brought back to Asgard, and the unhappy Thor tries to persuade Freyja to accept the plan. She, of course, has no interest in this marriage proposal, and tells Thor, “Sooner shall I fling myself out into the fair sea, rather than journey to Jotunheimar, by no means is this an option.”

Odin then calls for a meeting to discuss what should be done, and Heimdall comes up with a plan: Thor will be dressed up as a bride, which will allow them to get into the land of the giants and figure out a way to get the hammer back. Everyone seems to like this plan, so while Thor is prepared and dressed, Odin provides the rest of them with a ship to get to Jotunheimar.

Once there, Loki leads the conservation, doing his best to fool the giants. We get comical scenes like Þrymr trying to give his bride a kiss, while Thor attempts to avoid it.“Why are Freyja’s eyes fearsome?” the giant asks. “This does not seem to us the countenance of a maiden.”

Loki replies, “She did not sleep for eighteen half-days, so eager was Freyja to travel here.”

As for the reason Thor is not among the Asgardians here, Loki explains, “He is sobbing because of the hammer. I expect he wants to stay home drinking!”

The scene then quickly moves to a big hall, where the wedding feast will be held. Twelve giant men take up one side of the hall, the guests another, but Thor is made to sit with the giant women. While a band played, food was brought into the hall:

Large butcher’s troughs came to the table. The women sat up by Thor. The giants were assisted by their molars. No one used a knife. They fought so outrageously that the blood splattered all over them. Sometimes fists were raised.

I heard that the bride ate an ox. Their game was not dignified. She consumed twelve salmon and yet never let a bone fall to the floor.

The wedding scene certainly is noisy and crude, but apparently the trick has convinced Þrymr that it is safe to bring Mjollnir out now, and calls up a 301-year-old woman named Syrpa to retrieve it from the depths of the earth. While other men cannot move this weapon, the old woman can easily lift it. She returns with it to the wedding feast, and the action breaks out:

Is Thor ever happy about this! The maiden catches hold of Mjollnir. Many bit the dust. He breaks the tables apart down the middle. Bread and wine tumble to the floor. It gets rather worse for the giants’ mood; their hearts are taking flight.

He broke apart Besla’s spine. The unworthy woman fell there. Then he strikes twelve trolls; teeth were scattered across the hall floor.

Thor was furious. The big hammer is raised up. It came down on Saudungr’s cheek. It sank immediately into his skull.

Finally, Thor comes upon Þrymr, and strikes him on the skull. The poet adds, “The head shook soundly with the force of the blow.”

This is not the only Norse tale where Thor has to become a bride. Þrymskviða, part of the Poetic Edda, tells essentially the same tale with different details. You can also learn more about the gender-bending Norse gods in Linnea Hartsuyker’s article, “Queer Asgard Folk.”

The Bearded Bride: A Critical Edition of Þrymlur, is edited and translated by Lee Colwill and Haukur Þorgeirsson, and was published by the Viking Society for Northern Research in 2020. Click here to buy it on Amazon.com