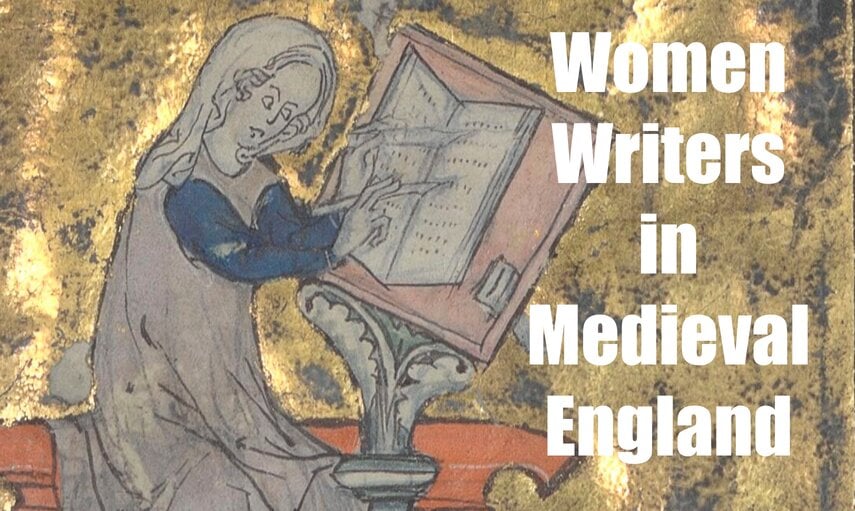 Many today assume that women were uneducated and unlettered in the Middle Ages. An overview of just a few of the female writers from medieval England shows otherwise.

It’s a common assumption today that there were very few women writers in the medieval period. This was made abundantly clear to me the other day when I was having a conversation with someone about my research on supernatural women in medieval literature. When discussing writers and texts, they said something along the lines of “there weren’t any women writing at this time anyways.” After tempering a strong reaction, I started thinking about the foundation of this misconception and reminiscing over the many wonderful female authors of the medieval period.

Were there Female Writers in the Medieval World?

The medieval literary world has been traditionally and popularly understood as male-dominated. Contemporary films and television shows set in the Middle Ages support this idea by featuring few female thinkers or writers. Before I delved deeply into the study of medieval literature, I too assumed there were only male writers in the medieval period. And indeed, almost all of the most celebrated medieval authors are male. Geoffrey Chaucer, John Gower, John Leland, William Langland are some of the most prominent, and all are male. The two most famous female writers of the period, Julian of Norwich and Margery Kempe, aren’t always as well known outside of those who have taken university classes in medieval literature because they wrote devotional texts.

So, many assume that there weren’t any female authors in the Middle Ages. This assumption is also often accompanied by the idea that women in the Middle Ages were largely uneducated. It’s assumed that little attention was paid to female education and so most women, except for a few outliers, could neither read nor write.

This assumption is of course false. There were not only many well-educated women at this time but also a rich literary culture created and sustained by women. Let’s take a look at a few of the most prominent women writers from medieval England.

There is evidence of female authorship in England from as early as the 8th century. One of the earliest recorded women writers was named Leoba. Leoba was born in southwestern England in the early 8th century to Dynne and Æbbe. She entered the monastery of Wimborne at a young age. She became a nun and was educated there by other prominent women of the time.

Leoba herself became a connected and literary figure. A sample of her literary work survives in a letter that she wrote to Boniface. Written in Latin, the poem reads as follows:

Farewell, and may you live long and happily, making intercession for me.
The omnipotent Ruler who alone created everything,
He who shines in splendor forever in His Father’s kingdom,
The perpetual fire by which the glory of Christ reigns,
May preserve you forever in perennial right.
(You can read the full letter here)

Leoba went on to become a prominent missionary and abbess. This surviving snippet of her poetry gives a good indication that women were both educated and interested in composing literary work even as early as the 8th century.

My favourite writer of the medieval period lived in England in the late twelfth century. Marie de France was (as her name suggests) born in France, but she lived and worked in the court of King Henry II and Eleanor of Aquitaine. She was highly educated and familiar both with the popular and courtly literature of the time as well as with religious discourse and doctrine.

Marie de France wrote in French (as was the court style of the time), but her surviving work is another excellent example of the stellar literary work being produced at this time by women in England.

Three works have been concretely identified as Marie’s: the Fables, the Lais, and St Patrick’s Purgatory. All were intended for a courtly, popular audience and all exhibit a poetic and narrative sophistication unparalleled (in my opinion) in medieval literature. My favourite of her works is Sir Lanval, a sophisticated lai that tells the story of a lesser-known knight of King Arthur’s court. The tale is both a wonderful love story and a critique of court culture. It finishes with the fairy queen riding in to save her knight from certain death at the hands of Arthur and his court. The text ends with a wonderfully feminist role reversal:

When the girl came through the gate
Lanval leapt, in one bound,
onto the palfrey, behind her.
With her he went to Avalun,
so the Bretons tell us
to a very beautiful island;
there the youth was carried off.
No man heard of him again,
and I have no more to tell.
(Translated by Robert Hanning and Joan Ferrante)

It’s a wonderfully feminist moment with the powerful fairy queen riding in as a hero to rescue the knight who becomes a kind of damsel-in-distress carried off by his rescuer. It’s an awesome moment and a wonderful testament to the skill of its author.

The third female author I will mention here is Julian of Norwich, an anchoress who lived in England around the turn of the fourteenth century. If you are not familiar with the term, an anchoress is someone who has devoted their life to the devotion of God to the extent that they choose to live in a very small room within the walls of a church. They spend all their time there thinking and praying and reading.

Julian’s writing is rooted in devotion and her own personal experience with religion. Before she became an anchoress, Julian experienced a series of sixteen visions of Christ while extremely ill. She spent the rest of her life contemplating and writing about those visions. Her main surviving literary work, called Revelations of Divine Love, describes her visions and provides her interpretations of them.

Her interpretations end up really brilliantly walking the line between orthodoxy and her own more adventurous readings of the scripture. The text reveals some incredibly nuanced theological ideas and really lovely metaphors that often speak to the spiritual power of women. She famously renders Christ as a mother. She refers to Christ as “our kind Mother, our gracious Mother, for he would wholly become our Mother in all things.” She goes on to say that “the Mother’s service is nearest, readiest, and surest, for it is most of kind. This office nor might, nor could, nor never none do the full but He alone. We wit that all our Mother’s bearing is us to pain and to dying; and what is that but our very Mother Jesus?” (Revelations of Divine Love, Chapter 60).

It’s a really interesting metaphor that nicely evokes the power and importance of women and especially mothers.

The final author(s) I will mention have no name and can’t be identified. That is because much of the literature that survives from the Middle Ages has no named author; many works, and especially many popular works, are simply attributed to “anonymous.”

The assumption that all anonymous authors are male, however, rests on the same assumption that I mentioned above: that women were uneducated at this period and so could not have written literary works. The writing that survives by women writers like those mentioned above proves this assumption to be false. There were certainly fewer educational opportunities for women than there were for men, but opportunities existed, and so it is certain that some medieval literature that survives without a named author was written by women. I personally believe that a number of my favourite works from the period were written by women. I just haven’t figured out a way to prove it yet.

While the few authors that I mentioned above verify that there were indeed female writers in medieval England, the fact remains that much literary work produced by women at the time has probably been lost. As such, we really don’t know how many authors from the period were female. I’m certain there were many more than the few whose writing has a concrete identity attached.

In any case, it’s clear that women writers not only existed in the Middle Ages but produced some of the most brilliant works of the period. What we need now is to see a few more of these kinds of women represented in contemporary shows and films set in the medieval or pseudo-medieval world. That contemporary shows and films set in the Middle Ages don’t tend to feature this kind of figure further perpetuates the idea that there weren’t female writers at the time. So, let’s bring these thinking, writing women more fully into popular consciousness and do away with the assumption that medieval women were uneducated and unlettered.