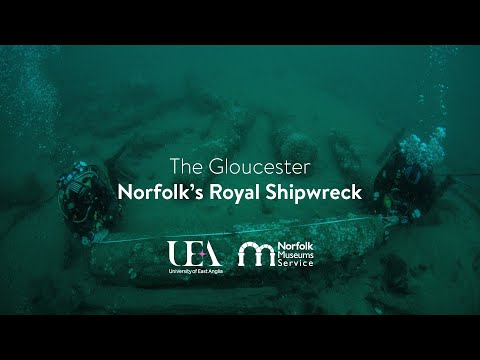 The wreck of the warship HMS Gloucester which sank in 1682 carrying the future James II of England and James VII of Scotland, has been discovered off the coast of Norfolk. James survived. The 50-gun frigate and 200 souls on board did not.

The younger brother of King Charles II, James, Duke of York, was heir to the throne as Charles had no legitimate issue. James had converted to Catholicism in the late 1660s, however, and the news broke in 1673 when James refused to disavow Catholic doctrine and resigned as Lord High Admiral. With tensions over ostensible Catholic treason plots rising and parliament on the verge of passing a bill to exclude James from the succession, Charles dispatched his brother to temporary exile in Scotland in 1679.

In 1682, Charles, who had suffered a stroke and was feeling his mortality, asked James to meet with him in London. The meeting went well and Charles gave James permission to pick up his pregnant wife in Edinburgh and move in with him in the Palace of Whitehall. The HMS Gloucester departed Portsmouth for Edinburgh with the Duke of York and a passel of high-ranking noblemen on board.

HMS Gloucester ran aground on a sandbar off  Great Yarmouth in the early morning of May 6th. The weather was blustery and the sandbars in the area are constantly shifting making them hard to avoid, especially for a ship going at a brisk six knots. Pushed by a strong easterly wind, Gloucester driven into the sand until the rudder snapped and the ship split down the keel. Less than an hour after hitting the sandbank, the ship was fully submerged. A few hours later, the majority of the 330 crew and passengers were dead.

James made it out unscathed, but not before playing a pivotal role in the delays that cost at least 200 people their lives. There was a flotilla accompanying the Gloucester — five other frigates and four royal yachts — and while the seas were choppy, a rapid rescue operation would still have been possible. James did not want to abandon ship at first, preferring to wait in the hope that it could be salvaged, and protocol required that royalty had to be evacuated before everyone else. He only left the Gloucester when it was minutes away from sinking under the waves. Even then he privileged the rescue of the strongbox containing his memoirs, putting it on a boat deliberately not filled to capacity to minimize the risk of it capsizing.

The exact location of the wreck was never documented, and 325 years would pass before its remains were spotted by divers Julian and Lincoln Barnwell and their friend James Little.

The Barnwell brothers are Norfolk-based printers, licensed divers and Honorary Fellows in the School of History at UEA. Lincoln said he was partly inspired to search for the wreck after watching the lifting of the Mary Rose on television as a child.

“It was our fourth dive season looking for Gloucester,” he said. “We were starting to believe that we were not going to find her, we’d dived so much and just found sand. On my descent to the seabed the first thing I spotted were large cannon laying on white sand, it was awe- inspiring and really beautiful.

“It instantly felt like a privilege to be there, it was so exciting. We were the only people in the world at that moment in time who knew where the wreck lay. That was special and I’ll never forget it. Our next job was to identify the site as the Gloucester.”

Another five years would pass before they were able to confirm the wreck’s identity when they recovered the ship’s bell. The find has been kept under wraps all this time because it is in International waters and maritime archaeologists wanted to be able to explore the wreck without drawing the attention of looters.

Artefacts rescued and conserved include clothes and shoes, navigational and other professional naval equipment, personal possessions, and many wine bottles.

One of the wine bottles bears a glass seal with iconography that connects it to a passenger onboard, Colonel George Legge, Master of Ordnance and Groom of the Bedchamber to the Duke of York.

Legge was the son of Elizabeth Washington, and the Washington crest on the wine bottle, with its distinctive ‘stars and stripes’, links it and the ship to the most famous member of the family, George Washington, the first US President. The design is found on the Purple Heart, a US decoration awarded in the name of the President to those wounded or killed while serving with the military.

Some of the wine bottles were recovered intact and still sealed with wine inside. Researchers will attempt to extract and analyze their contents while the investigation of the Gloucester’s archaeological remains and historical records continues.