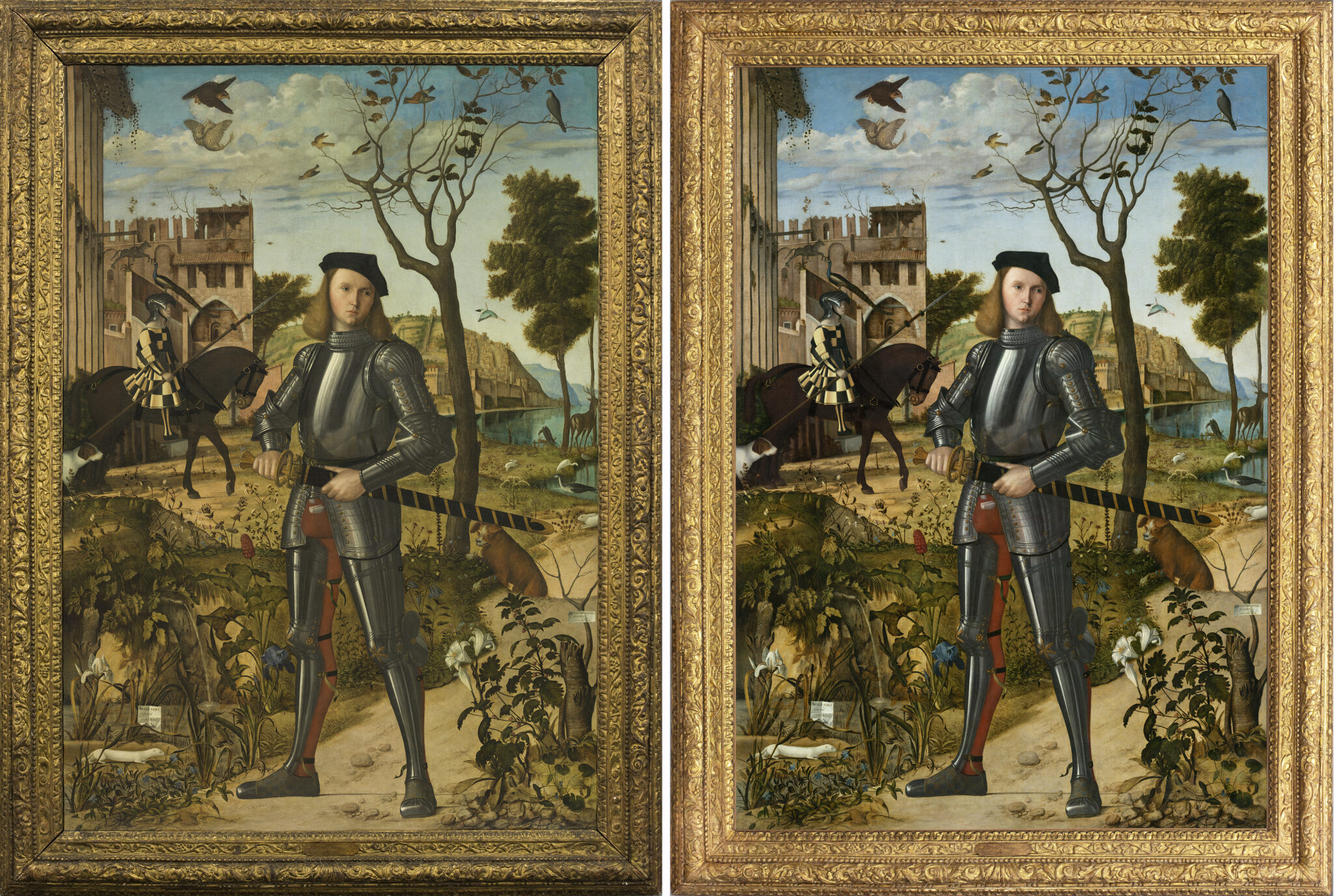 Young Knight in a Landscape (c. 1505) by Vittore Carpaccio is one of the most iconic masterpieces of the many masterpieces of Madrid’s Museo Nacional Thyssen-Bornemisza. A comprehensive new study and restoration program undertaken in public view in 2020 and through March of 2021 has removed yellowed varnish and muddied overpainting to reveal the original rich colors of this uniquely complex symbolic landscape. The painting is now part of a special exhibition dedicated to the work, its imagery and the restoration itself. 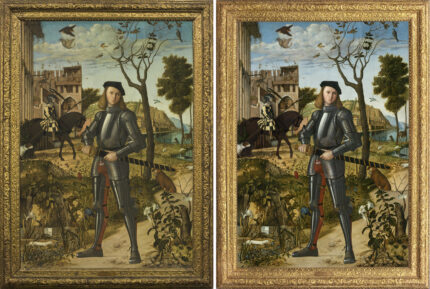 The large-scale painting depicts a young man in plate armour drawing or sheathing his sword. His red hose show under the armor strapped to his right leg. He stands on a path bordered by a variety of plants. A snow-white ermine is in the glad on the left. Behind him the walls of a city extend to the vanishing point, overlooking a body of water. Animals — rabbits, deer, dogs, a veritable conference of the birds — abound on land, sea and sky.

In the left middle ground immediately behind the knight, a second one emerges from a dilapidated fortress. Mounted on a dun steed, he complements the central subject with his yellow and black checkered livery that matches the standing knight’s shoes, barely visible shadows underneath his chain mail. The mounted knight is armed with pieces the standing knight doesn’t have — a pike, a helmet with visor — and a peacock is perched on his helmet.

The work contains a wide range of symbolic elements, each of which has significance and meaning: the fauna, flora, landscape, figures, all transmit an interconnected message. Each detail is located in a strategic position within the composition in order to create a narrative associated with the virtues and deeds attributed to the figure and in order to exalt his memory. Like the lance that the mounted knight holds and points towards a falcon (symbol of vision, strategy, knowledge and victory) perched on a branch at the upper right corner. In turn, this imaginary line connects with the dog that accompanies the knight and is a symbol of fidelity and sacrifice. Other “lines” radiating from the falcon link the principal figure with different details among the many to be found in this work. The result is an invisible network of lines that connects all these elements to the principal figure, forming a grid in which he appears to be trapped and thus involved in this tension.

The figure of the young knight is made up of two opposing halves: the upper half – clad in Italianate armour with simple rivets and motifs of feathers or scales on the arm guards and gorget – is shown as resigned and melancholy while the lower half, with floral motifs decorating the different parts of the German-style armour, is shown as decided and arrogant. The knight’s sword divides these two parts of the figure, a duality that is repeated throughout the painting and which refers to the opposition of good and evil, victory and defeat, the heavenly and the earthly realms.

Some scholars believe it to be a portrait of a real person rather than a pure allegory. If it is a true portrait, it would be the oldest full-length portrait known. One possible candidate proposed by the museum is Venetian naval captain Marco Gabriel, who fought Ottoman forces in the siege of Modone (a strategically important port in the Peloponnese) in 1500. He was captured and executed when the Ottomans took the city.

This hypothesis explains the presence of the walled city in the painting, which is possibly an idealised version of the fortress, as well as the destroyed building on the left of the composition from which a rider emerges; a young knight mounted on a dark charger (symbol of inner wisdom and death), accompanied by his faithful dog in an allegorical image of the knight’s soul embarking on its path towards rebirth. According to this theory, this journey is also symbolised in the trees on the other side of the scene: a leafy oak in the background, its autumnal version in the middle ground and a cut-down tree next to the principal figure from which new shoots are growing and which has a cartouche with the name of the artist and the painting’s date.

This cartouche was rediscovered underneath old overpaints during cleaning in 1958, as was the one with the inscription “Mal mori quam foedari” (Rather dead than dishonoured), rediscovered next to the ermine.

The motto next to the stoat in his winter white fur suggests the knight may have been a member of the chivalric Order of the Ermine, an honor conferred by the Dukes (and Duchess Anne) of Brittany who had stylized black-tipped ermine tails in their coat of arms.

The museum has created an excellent video about the restoration and technical study of the painting. Visitors to the museum will be able to enjoy that video next to the portrait in the new exhibition, but the rest of us will have to make do with YouTube and the museum’s magnificent gigapixel image of Young Knight in a Landscape which puts you eye-to-beady-eye with the ermine.